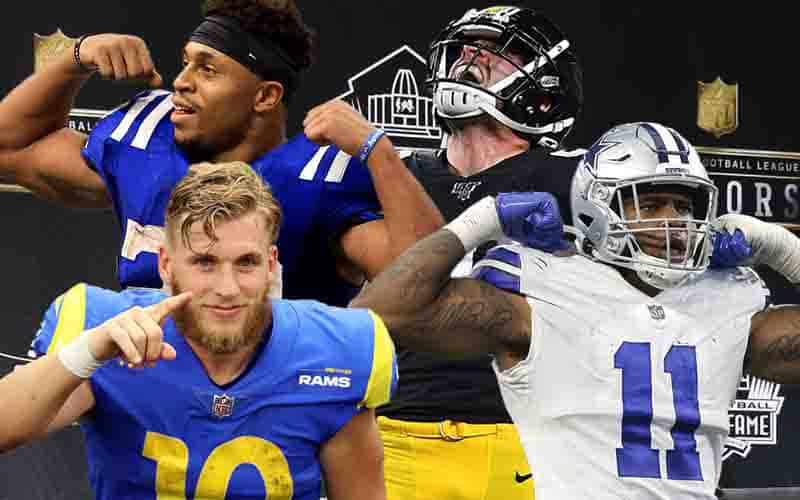 On Thursday, February 10, 2022, the NFL Honors ceremony will take place and award the top players in the league a variety of superlatives, including the NFL MVP, Offensive and Defensive Rookie of the Year, and more.

Most of these categories feature odds at NFL betting sites that suggest runaway winners after 16 weeks of play, but current Offensive and Defensive Player of the Year lines are implying that it is a two-man race in each category.

Indianapolis Colts running back Jonathan Taylor has imposed his will upon defenses across the NFL this season and is the current odds leader to win the league’s Offensive Player of the Year Award for 2021-22.

The resurgence of the Colts into NFL Playoff contention is largely due to the efforts of Taylor. Have a look at his stat line for further evidence of his contributions on offense.

We could suggest that Taylor has gone “beast mode” this season, but these are numbers that even Marshaun Lynch would struggle to achieve in his prime. Taylor has reeled off just under 2,000 total yards and 19 touchdowns with two weeks of play remaining in 2021-22.

Although the AFC South Division is likely out of reach due to their early-season woes against the Tennessee Titans, a playoff berth could clinch the Offensive Player of the Year honors for Jonathan Taylor.

Los Angeles Rams wide receiver Cooper Kupp is on a historic pace in his first season pairing up with quarterback Matthew Stafford, and now finds himself in a neck-and-neck battle with Taylor to become the 2021-22 NFL Offensive POY.

Kupp has maintained his high level of play across the entire 15 games the Rams have played thus far, but in order to win Offensive Player of the Year, he will need to post two more big-time statistical performances over the final weeks.

The following NFL prop bet for Defensive Player of the Year includes Dallas Cowboys Linebacker Micah Parsons and Pittsburgh Steelers LB TJ Watt in a tie for the top position.

Parsons, a rookie out of Penn State, has clearly panned out well, but voters will be swayed by TJ Watt’s impressive sack total and his namesake that draws comparisons to his brother, JJ Watt.

Watt is a high-energy player and his results are easily visible and evident to fans, bettors, and oddsmakers. The same can be said for Micah Parsons, but he is on the field for more snaps than Watt and isn’t allowed the time to rest up while waiting for a passing scenario to reenter the game.

Either way, both players provide top-level value to their teams, and their identical NFL moneyline odds are probably set by the Cowboys heading to the playoffs and Watt’s fame.

Regardless of whether bets are placed on Watt or Parsons, wagers will net 2-to-1 payouts if the correct Defensive Player of the Year is selected.