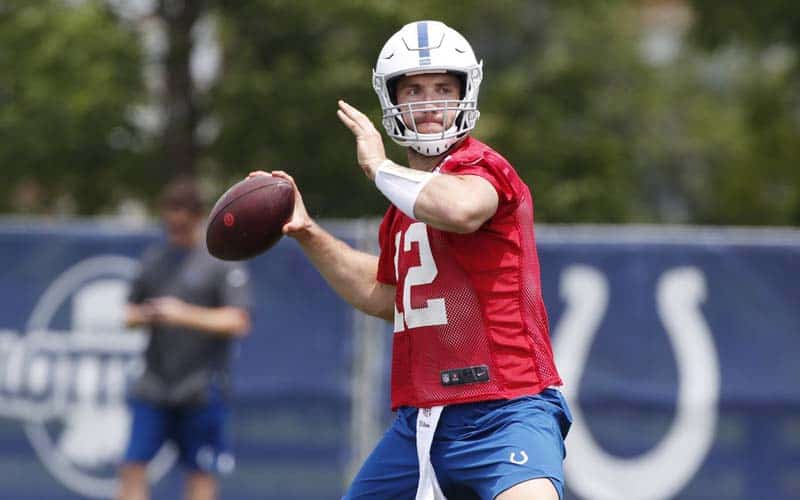 With a healthy dose of Luck, oddsmakers don’t see the other three AFC South teams stopping the Colts stampede through the division this year.

The Indianapolis Colts enter training camp for the 2019 NFL season as the division favorites, and with MVP candidate QB Andrew Luck injury-free alongside a stacked roster on paper, it’s easy to see why they may not only win the AFC South but potentially be a dark horse to win Super Bowl LIV.

However, this is still a pretty tough division. Gone are the seasons where the AFC South teams were a pushover, and the Houston Texans, who won the division last year and have their own MVP-caliber QB with Deshaun Watson, are more than capable of dashing the Colts title hopes.

And don’t count out the Jacksonville Jaguars or the Tennessee Titans because, despite the Colts opening as a pretty significant favorite, the AFC South champion may not be decided until the final week of the regular season.

Arguably the best decision the Colts organization made in recent years was hiring Chris Ballard, who has proven year after year he’s one of the best general managers in the NFL and knows how to build a football team. The team hasn’t won the AFC South since 2014, but the Colts are poised to end that drought this season.

Ballard has mastered the draft and free agency in the past couple of years. OG Quinten Nelson and LB Darius Leonard both made the Pro Bowl in their rookie season and are already considered elite players at their position. Looking at this year, drafting CB Rock Ya-Sin and WR Parris Campbell and signing WR Devin Funchess and Pro Bowl DE Justin Houston fill many holes in the roster that were exposed a year ago.

And remember: Just a season ago, many predicted the Colts would be the worst team in the league and that Luck’s career might be over. But after having what may have been the best season of his career and taking the team to the second round of the playoffs, Luck is one of the favorites to win the MVP in 2019. Credit also goes to Frank Reich, who enters his second year with the team, for creating a winning culture in the locker room in just one season.

The 2018 AFC South champs had high hopes last season until the division rival Colts knocked them out of the playoffs in the first round. Now, the team will look to redeem themselves, but with talks of head coach Bill O’Brien potentially being on the hot seat, the most important factor for the Texans will be to maintain focus and block out the distractions.

But entering training camp for 2019, that appears to be easier said than done. LB Jadeveon Clowney didn’t get a contract extension before the deadline, so the Texans had to place a franchise tag on him. As a result, he won’t be attending camp, but talks haven’t soured quite yet.

Despite these stories heading into the season, the Texans have a lot of things going right for them, especially after seeing Watson have an exceptional passing season last year. Both DE JJ Watt and WR DeAndre Hopkins are banged up at the moment but should be good to go for the opener. The O-line needs to improve and whether Tytus Howard and Max Scharping can help them do that will likely determine the team’s division chances in 2019.

The Blake Bortles era with the Jaguars is officially over, and the team hopes that QB Nick Foles still has some of that Super Bowl LII MVP magic left in the tank. It’s no surprise that the team finally moved on from Bortles, but whether Foles is the answer will likely determine how much longer Doug Marrone is the head coach.

The Jaguars took a big leap back in 2018 after being just one game away from reaching Super Bowl LII in the previous season. Don’t worry about the defense: They’ll be elite again this season. But even if Foles plays at a high level, the offense will need RB Leonard Fournette to stay healthy since he’s only started roughly two-thirds (21 out of 31) of the teams’ games throughout his first two seasons in the backfield.

Unfortunately, the offense simply lacks receivers around Fournette that can make opposing defenses think twice about stacking the box. The team has numerous players that could step up and be that playmaker, but until one does — and does it on a consistent basis — it’s hard to see the team competing unless Foles pulls off some miracles, but you should bet against that happening.

This will be a vital year for the future of both the Titans and QB Marcus Mariota since the team will need to make a decision on whether to sign Mariota to a new contact when next year’s offseason rolls around. And considering his injury history, the odds are against him returning to the Titans in 2020.

Mariota has yet to play a full season in the NFL since being drafted No.2 overall in 2015, but despite this, the Titans were one win away from reaching the playoffs last season, losing to the Colts in the final game of the regular season — and yes, Mariota was injured for that game. Ryan Tannehill is now the backup, but that hardly inspires a ton of confidence in the Titans chances of winning the AFC South.

Coach Mike Vrabel got the Titans defense to rank inside the top 10 last season, and the addition of DE Cameron Wake further bolsters that side of the ball. The offensive improvement is the key, and Vrabel must get RB Derrick Henry — who had by far his best season in the NFL last season with over 1,000 yards rushing and 12 TDs — even more touches in 2019. If he doesn’t, then your bet may join the injured Mariota on the bench this season.