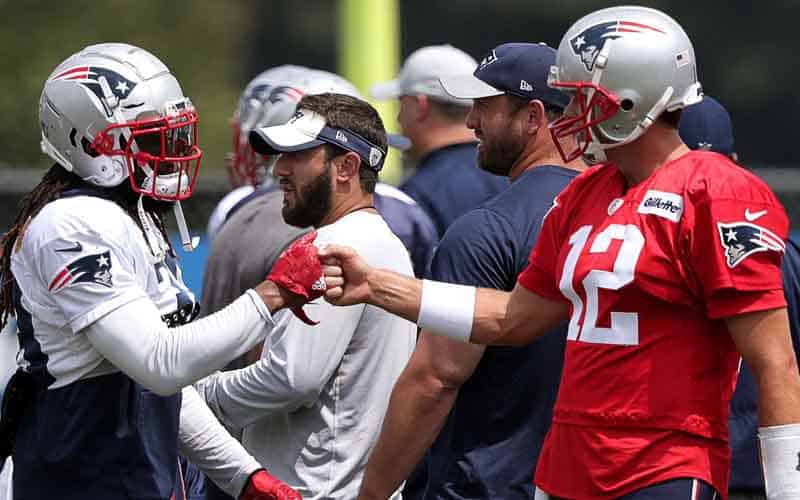 NFL training camp begins this week for most of the league’s 32 teams, and that means the “most wonderful time of the year” for betting is officially here.

Throughout the week we’ll preview the division odds for each team heading into the 2019 NFL season. We’ll start with the AFC East — home to the defending Super Bowl champion New England Patriots, New York Jets, Buffalo Bills, and the Miami Dolphins.

Ever since Bill Belichick and Tom Brady began their quest together for NFL domination way back in 2001 — winning 6 Super Bowls in 9 appearances during that time — the Patriots have proven they own the AFC East this millennium by winning 17 division titles over the past 19 years.

The last time Brady-Belichick didn’t win the division was when the GOAT tore his ACL in Week 1 of the 2008 season, and the team missed the playoffs with an 11-5 record — becoming only the second 11-win team in NFL history not to make the postseason.

With history on their side, what are the odds the Patriots win the AFC East for an 11th consecutive year? And do the Jets, Bills, or Dolphins have a chance?

Despite coming off 10 consecutive division titles and adding another Lombardi Trophy to the collection, the team will need to find replacements for the retired Rob Gronkowski and plug the holes left by Trey Flowers and Trent Brown. Michael Bennett joins the team and is capable of filling the void at pass rusher left by Flowers, but finding a replacement at TE and LT will prove much more difficult.

Sony Michel will likely be asked to carry more of the load for the Patriots offense this season if he can stay healthy. Also, keep an eye on 6’4” rookie WR N’Keal Harry, who could be Brady’s next favorite weapon.

If there ever was a safe bet in sports, the Patriots winning the AFC East in the Brady-Belichick era would be it. Honestly, there’s no reason to see that changing until “I found the Fountain of Youth” Brady, who turns 42 next month, officially decides to hang up the cleats and give the other three AFC East teams (and the rest of the NFL) a chance at winning.

It was not the rookie season that QB Sam Darnold had hope for, one where he threw 17 TDs, 15 INTs, and finished with a 57.7% completion rate. In the NFL, it all starts with the signal-caller so if the Jets want to improve their odds — and not be dead last in the AFC East like last year’s 4-12 season — then Darnold will need to step up.

Fortunately for him, Adam Gase takes over as head coach, but perhaps the biggest news is that the Jets are getting a well-rested Le’Veon Bell, who should get roughly 700 touches (my own guesstimate) to make up for his season-long vacation with the Steelers last year.

Defensive coordinator Gregg Williams is another big hire and could take this unit — which added C.J. Mosley and drafted Quinnen Williams — to an elite level. The OL and pass catchers will need to improve in 2019 if they want to challenge the Patriots, but should those two groups improve, along with Darnold, then a bet on the Jets could hold a lot of value.

The “Bills Mafia” will need to improve across the board before they can win you any dollars bills. Much like Darnold on the Jets, second-year QB Josh Allen’s passing was anemic in his 12 games in 2018, finishing with 10 TDs, 12 INTs, and 52.8% completion rate. However, Allen does have the benefit of his legs, rushing for 631 yards and 8 TDs, so that’s a positive sign going forward.

But there are much larger issues for a Bills squad that finished 6-10 a year ago since the team has replaced the entire offensive line apart from LT Dion Dawkins. This is an enormous red flag that should cause Allen to take out an insurance policy in case he doesn’t survive this season.

Perhaps the brightest spot on the roster is rookie DT Ed Oliver, who’s been a beast on the d-line ever since high school, but the Bills will need more than one new potential star player if they want any chance of competing in the division.

Where to even begin with the Dolphins. Look, I’ll go ahead and say it: Your insane if you’re putting your money on them to win the AFC East. Whenever a team labels themselves as “rebuilding” then just know that it actually means “we know we’re going to suck for the foreseeable future, but hey we warned you.”

QB Josh “Chosen” Rosen will likely be the starter following a terrible rookie season in Arizona that made the Cardinals give him the boot in favor of drafting Heisman winner Kyler Murray. Although, new head coach Brian Flores may add in a little Fitzmagic which will be pointless with no playmakers.

On the defensive side, Cameron Wake and Robert Quinn are gone, but rookie Christian Wilkins could fill some of that production. At the end of the day, when signing players from the defunct AAF is your biggest headline of the offseason, you know the team is in trouble and destined for next year’s No.1 pick in the draft. Don’t bet on the Dolphins unless you want your wager to be sleeping with the fishes (yes, I know Dolphins are mammals).