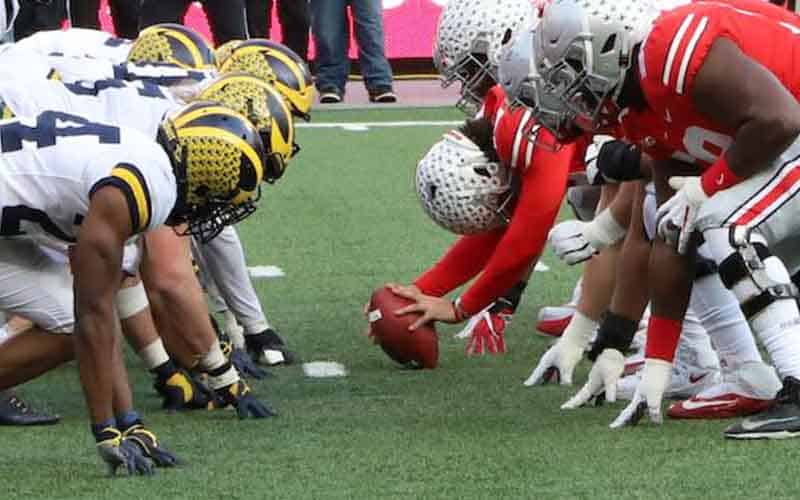 The latest batch of CFP rankings issued by the College Football Playoffs Selection Committee now mirrors the most recent NCAAF futures offered forth by online sports betting sites for the top five positions.

In this final weekend of regular season play prior to the various conference championship games, the Cincinnati Bearcats only need to win this Saturday against the 7-4 East Carolina Pirates to secure their spot in the CFP.

NCAA College Football betting sites are favoring the Bearcats to sink the pirates by a two-touchdown margin, and the moneyline odds of -605 for Cincinnati indicate a near-certain victory and their subsequent entrance into the final four.

The same cannot be said for many others as there are major rivalry games taking place this Saturday that will have gargantuan implications on the final College Football Playoffs picture. Have a look at the rankings and the odds below.

Now consider that the #2 Ohio State Buckeyes and #5 Michigan Wolverines play this Saturday with the Big Ten East Division on the line. The victor still has to win the Big Ten Championship Game to reach the CFP, and it appears that either the Wisconsin Badgers or Iowa Hawkeyes will be the opponent on December 4th.

The odds for CFP betting are indicative of the future and not the present, so bookmakers are certainly leaning toward Ohio State besting Michigan. The Buckeyes were able to leap the Alabama Crimson Tide in the rankings and the odds over the weekend, claiming the second overall spot in both.

If Ohio State can best the Wolverines in Michigan Stadium and manage to cover the 8.5 point spread, then they’ll certainly be deserving of their placement among the final four teams competing for a National Championship in 2021-22.

The Georgia Bulldogs can also secure their top four status for the college football postseason if and when they defeat the Georgia Tech Yellowjackets this Saturday because a loss to Alabama in the SEC Championship Game will not likely drop them to 5 or lower in the rankings.

Georgia vs. Georgia Tech is always slated as the last regular season game for each Peach State-based program, yet this year, the Yellowjackets do not appear poised to offer up much resistance to the championship-bound Bulldogs.

UGA is favored by 35 points over the Ramblin’ Wreck of Georgia Tech. That’s five touchdowns folks, and the way that the Bulldogs have been playing as of late, they may just cover.

Oddsmakers at NCAAF National Championship betting sites are producing moneylines on the Georgia Bulldogs to win it all this season that are in the negative, with their nearest opponent, Ohio State, separated by 420 points.

While those positive moneylines are attractive due to their exponential payouts, it might be prudent to risk more than the book in this case and at least secure a gain when the Dogs hoist the championship trophy on January 10th.