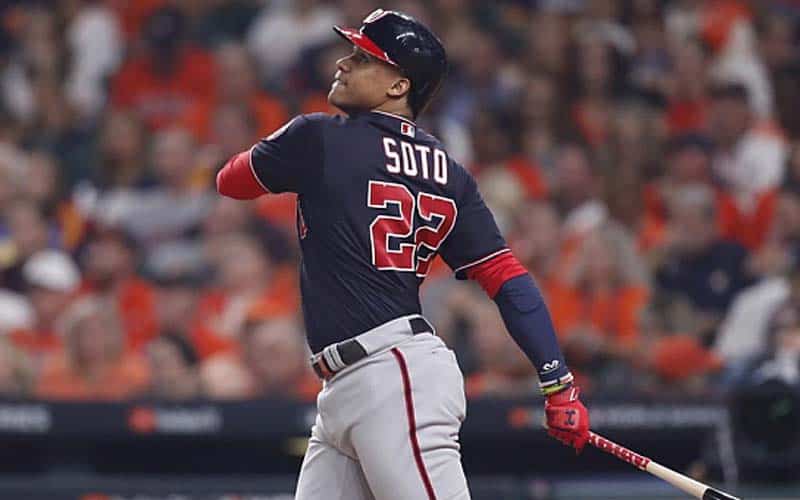 Well, no one really saw that coming.

The Washington Nationals stole the first game of the World Series after a 5-4 win over the Houston Astros, in part due to the stellar performance of 20-year-old Juan Soto.

Prior to Game 1 last night, the World Series betting odds gave Houston -190 chances of taking a 1-0 lead and -215 odds are winning the entire series.

An experienced ‘Stros squad beginning the World Series with co-ace Gerrit Cole on the mound seemed like a shoo-in against a Washington team playing in its first-ever Fall Classic.

That did not stop Soto. Like many other players on his team, this was his first deep postseason run.

Soto made the most out of the opportunity, becoming the fourth-youngest player to ever homer in a World Series game. The other three players to accomplish the feat were Mickey Mantle, Miguel Cabrera, and Andruw Jones.

Not turning 21 until Friday, Soto joined Jones and Joe Garagiola as the third player ever to knock in three World Series RBIs before reaching the legal drinking age.

Of course, these odds are nearly even. When converted to percentages, the Nationals have a 51.09% chance of winning compared to Houston’s 48.91% chance.

Nevertheless, Houston is expected to even the series tonight in Game 2 at home with -178 odds. The ‘Stros are 1.5 run favorites in this game with the matchup’s total over/under set at 7.5 runs.

Tonight’s game, set for 8:07 pm ET on Fox, features both teams’ aces: Stephen Strasburg will pitch for the Nats and Justin Verlander for the Astros.

Verlander, on the other hand, went 21-6 during the regular season, posting a 2.58 ERA. However, in his four postseason starts this year, Verlander has gone 1-2 with a 3.70 ERA.

But as Soto proved, any player can change the series at any time. Or age.