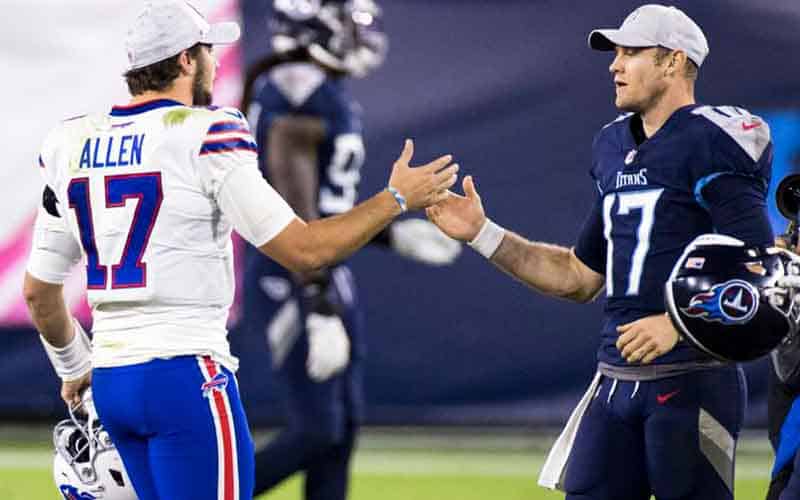 The Tennessee Titans are 0-1 after a shocking 21-20 loss to the New York Giants in Week 1. Now, the Titans must travel to Buffalo and face the Super Bowl favorite Bills in an effort to climb back to .500.

Legal NFL sportsbook sites are favoring the Bills to win by 10 points. While wagering on the Titans to cover may be tempting, much of their fate depends on how effective running back Derrick Henry will be.

While falling into a 0-2 hole to start the NFL season would usually mean that a playoff berth is unlikely, that’s not the case in the AFC South. The following AFC South standings reveal that the division is entirely up for grabs if the Titans win or lose.

While the Jaguars have surprised critics thus far, it remains to be seen as to whether or not they’ll continue their success for the full course of an NFL season.

The Houston Texans are playing above their heads right now under head coach Lovie Smith, but like the Jags, it is only a matter of time before superior NFL teams begin to hang routine losses on them.

No matter the results of tonight’s MNF game, the Colts and the Titans are the cream of the AFC South, and the division crown could come down to which team is less mediocre come early January.

Betting on the Buffalo Bills to cover seems risky, as this game has the potential to get bogged down in a defensive struggle.

The Minnesota Vikings came out hot in Week 1, delivering a statement win over the Green Bay Packers by a score of 23-7. The Philadephia Eagles were able to narrowly escape the Detroit Lions in a 38-35 thriller last Sunday and now host the Vikings in the second Monday Night Football game this evening.

The Eagles are favored to win by less than a field goal, and the Vikings’ moneyline odds to win suggest that this MNF game will be closely contested.

Philadelphia will need the win to keep pace with the New York Giants, who are off to an unexpected 2-0 start. Minnesota has a half-game lead on the Green Bay Packers and holds the tie-break edge.

The Packers Week 1 struggles date back to last season when they were blown out by the New Orleans Saints, but also, like last year, Green Bay quickly rebounded and won their next game in dominant fashion.

With that in mind, the Vikings must win to sustain a one-game lead on the Pack in the division. The Eagles’ NFL point spread of -2.5 is too close for comfort at the moment, but we do believe that Philadelphia will win the game.