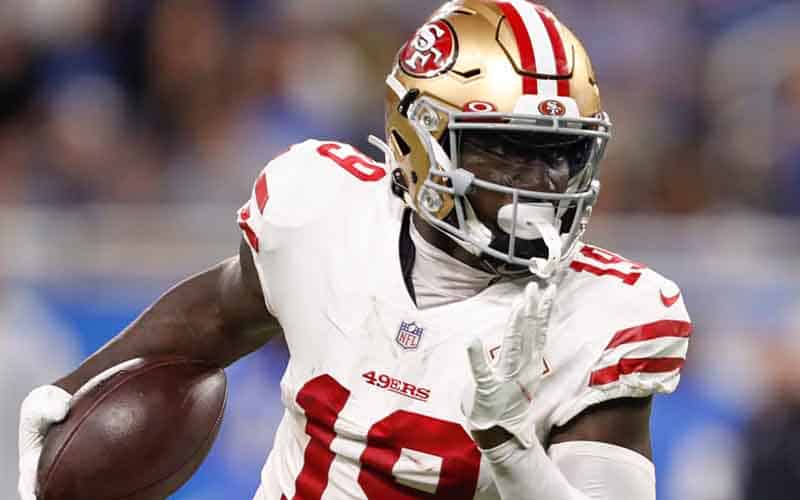 Tonight’s Monday Night Football matchup features two NFC West teams that are on opposing sides of the standings. The Los Angeles Rams are 7-2 and coming off of an ugly 28-16 loss against the Tennessee Titans of the AFC.

The Arizona Cardinals dropped their second game of the 2021-22 NFL season yesterday against the Carolina Panthers, and the door is now open for the Rams to pull even.

That’s a big “if,” however, as the San Francisco 49ers are in a must-win situation. If they do not hold serve against the LA Rams at home tonight, the 49ers will fall to 3-6 and will spend the rest of the season playing catchup if they hope to make it to the playoffs.

NFL betting is reaching its mid-season pinnacle, and the contenders are beginning to separate themselves from the bottom feeders, and tonight’s game is where the rubber literally meets the road.

San Francisco may be 2 games under .500 as of this writing, but they’ve offered fans plenty of reason to be optimistic about this season. Wide receiver Deebo Samuel, Jr. has emerged as a solid number 1 that can be relied on weekly, something he has struggled with in prior years.

NFL Playoff betting sites still feature San Francisco as a potential postseason contender, and that projection matches the current reality. A win tonight keeps the 49ers within a game of the 7th and final seed in the NFC half of the playoff bracket.

That seventh seed in the NFC is currently held by the aforementioned Carolina Panthers which should also inspire the 49ers faithful to keep the… faith. Up next for the 49ers are the Jacksonville Jaguars, Minnesota Vikings, Seattle Seahawks, and Cincinnati Bengals, all teams that San Francisco can at worst hang with.

All winning streaks have to begin somewhere, and if you believe that tonight’s edition of MNF will mark the beginning of a San Francisco 49ers playoff run, perhaps laying some action on those prospects is in order.

Although the above NFL odds may seem to have a negative outlook for San Francisco, the 49ers’ moneyline places them eighth overall which is one game out from postseason contention.

The current 7 seeded Panthers are ranked two spots below San Francisco, suggesting that if the 49ers can pull even over the next few weeks, they can surge ahead of the middle of the pack.

That journey must begin tonight for San Francisco because another loss could force them to focus on next year and turn the starting QB reigns over from Jimmy Garoppoli to rookie Trey Lance.