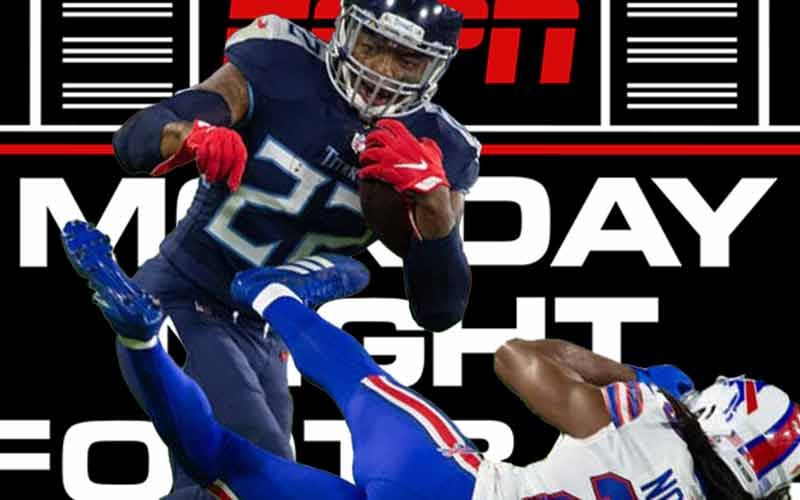 The Buffalo Bills enter Monday Night Football with a 4-1 record and can secure a two-game lead in the AFC West with a win against the Tennessee Titans, and feat they are favored to accomplish by at least 6.5 points.

The Titans have a win-loss record of 3-2. If Tennessee can defend Nissan Stadium in Nashville and send the Bills home with a loss, they’ll enjoy a two-game cushion against their nearest AFC South competitor, the Indianapolis Colts.

This morning’s futures at legal NFL betting sites indicate that both the Bills and the Titans will easily win their divisions and earn one of the AFC’s coveted seven playoff seeds.

Their NFL moneyline odds for winning their respective divisions are nearly certain, and represent a complete lack of competition from the remaining three teams.

Still, NFL oddsmakers feel that there is a touchdown of separation between these two AFC powerhouse franchises, even at the Titans’ house, but a win from Tennessee tonight will prove to the pro football bookies that they are not to be taken lightly against anyone.

Both teams are similar in makeup in that they are run-focused offenses that have recently been injected with additional firepower at the wide receiver position to fuel their passing games.

Stefon Diggs has been electric since joining the Bills via trade from the Minnesota Vikings in 2020, earning first-team All-Pro honors in his first year with the team.

Julio Jones has shown promise in his first season with the Titans, but his potential has been limited due to missing the last 2 games with an injury to his hamstring.

Jones has been practicing all week and has announced his intentions of playing tonight, but that hasn’t swayed the odds in the Titans’ favor at online football betting sites.

“I’m going to be ready to go. I’m putting the work in each and every day to prepare myself for Monday night.”

The futures odds posted at NFL Playoff betting sites place both Tennessee and Buffalo among the top 11 teams, with the Bills currently the favored team to win the AFC and advance to Super Bowl LVI.

The Titans could certainly rock the boat at online sportsbooks by beating the Bills, and NFL gamblers can earn some solid coin by betting on Tennessee’s moneyline if confident in that potential result.

Each dollar bet on the Titans to win Monday Night Football will result in a net gain of $2.30. One dollar wagers on the Titans odds to win Super Bowl 56 (+3500) will net gamblers a stout $35, but only if action is laid now.

Waiting until after tonight’s game will result in narrower NFL odds with smaller payouts, and she/he who hesitates doesn’t profit off of what they prognosticate.