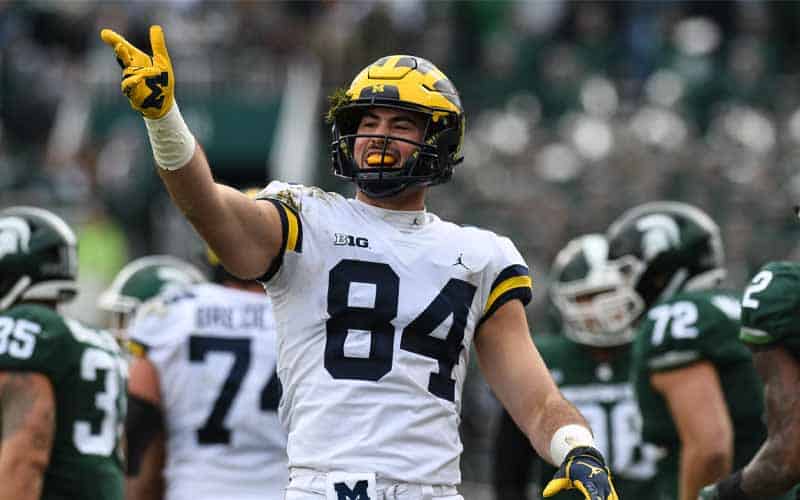 Michigan may have only just begun the drive toward legalizing sports betting, but lawmakers in the Wolverine State have already shown they’re more than capable of moving the chains.

Legal sports betting in Michigan got the first down Tuesday, September 17, when a package of three bills easily advanced out of the House Committee on Regulatory Reform.

The House committee overwhelmingly approved of the primary bill—HB 4916—that legalizes in-person, online, and mobile sports betting in the state, voting 11-2, with two abstentions, in favor of the key legislation.

Also advancing out of committee were two measures—HB 4917 and HB 4918—to amend both “The Michigan penal code” and “The code of criminal procedure” to include criminal provisions for violating regulations should the primary bill pass.

With some momentum now behind the comprehensive sports betting bill package, the legislation now heads to the House Ways And Means Committee, where Republican Rep. Brandt Iden—the primary bill’s sponsor—will chair the discussion.

Iden said he hopes Michigan’s sports betting bill continues to advance since it would establish a safe, regulated environment in the state while simultaneously provide a boost to the amount of tax revenue generated each year.

“Because this is already going on in the market place so we can protect those people who want to play and want to play legally, and we can, you know, make the state a little bit of money, which I think is also a positive,” Iden said.

The bill, introduced by Iden on Wednesday, September 4, would allow Michigan’s three commercial casinos and Detroit’s 23 Native American casinos to accept wagers on professional and collegiate sporting events at brick-and-mortar locations as well as online and through mobile apps.

All 26 casinos are eligible to apply for a sportsbook license, and approved operators are allowed to have one skin as a partner to provide website-based betting services and apps for smartphones and tablets.

Anyone who is at least 21 years old is allowed to bet on sports in Michigan, according to the bill’s text. Online and mobile betting will be available statewide, and a person must be physically located inside state lines access the state’s regulated sportsbooks via the Internet.

The bill also creates the Division of Sports Betting within the Michigan Gaming Control Board (MGCB), which would be granted the authority to create rules, establish regulations, issue licenses, and oversee all sports betting operations in the state.

But as the legislation advances closer toward the goal line, one major part of the sports betting bill may cause the drive to stall.

Under its current language, Michigan sportsbooks operated by commercial casinos would be subject to an 11.25% tax rate while tribal casinos with sports betting would be required to pay an 8% tax rate on gross revenue.

The subject of how much the sports betting tax rate should be is a decisive issue between Iden and Democratic Gov. Gretchen Whitmer, who believes sportsbooks should have to pay a higher tax.

Iden said last week he’s willing to negotiate with the governor on the issue of taxation and hopes to agree on a deal in time for Super Bowl 54 next year.

However, while Iden said he’s open to raising the tax rate on licensed operators, he cautioned against raising the percentage too high because doing so would put Michigan’s sportsbooks at a significant disadvantage when compared to the 13 states currently offering sports betting.

Nevada, for example, imposes a 6.75% tax rate on revenue from sports betting and along with Iowa, is the lowest in the United States. Pennsylvania, on the other hand, requires its sportsbook operators to pay a 36% tax—more than double the rate of any other state.

“I’m willing to come up to 9, 9 and a half,” Iden said last week. “I think we could probably even maybe get to 10, potentially. I’ve thrown these numbers out for the governor, and I’m just waiting on a response for this.”

Despite having the sports betting legislation advance yesterday, Iden—and other lawmakers who support legalization—don’t want to celebrate anything until the bill crossed the goal line.

As the Ways and Means chairman, Iden could send the bill to the House floor but knows he needs to resolve the issue of taxation first—and whether sportsbooks would draw revenue away from the Lottery—since Whitner shares similar reservations to the previous governor, Republican Rick Synder, who vetoed a bill that included sports betting as time expired on last year’s session.

The House Ways and Means Committee is expected to start hearings on the legislation in the coming weeks.

Currently, the bill’s path resembles the game of football in a way since it becomes more difficult to score a touchdown in football as a team gets closer and closer to the end zone.

If yesterday was the initial first down, and the House and Senate floor is the red zone, then the governor’s desk is the goal line—and Michigan lawmakers know all too well what it feels like to come up just short.