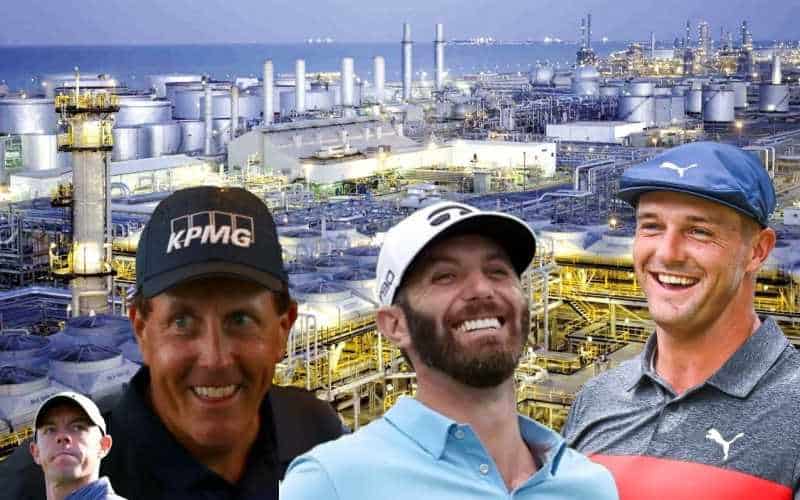 The PGA Tour has long enjoyed a virtual monopoly on the top level of global professional golf. However, with the massively talked-about and “controversial” launch of LIV Golf, that’s looking like it’s about to come to an end.

Amusingly, the PGA seems to have been ill prepared for such a deep-pocketed challenge as the one presented by Saudi Arabia and its billion-dollar pro golf endeavor. The long-storied league is showing its hand – and, frankly, showing its fear.

For example, in suspending all the PGA pros who had the audacity to swing their clubs for a breezy British weekend under the banner of another promotion, the PGA isn’t taking a particularly strong posture.

On the contrary, its posture is an overly defensive one.

If the PGA were the de facto be all and end all golf league – if it still had the cachet to cash in on its branding and history and legacy – it would dismiss the LIV Golf the same way that the NFL has dismissed countless spring football leagues over the years.

The PGA would just ignore the LIV.

Instead, the PGA has banned all 18 of the following now-former PGA pros indefinitely, with plenty more to surely come:

Here’s how PGA Tour commissioner Jay Monahan justified the bans, as expressed in a recent letter to current PGA players ostensibly thinking about making the leap to LIV:

“These players have made their choice for their own financial-based reasons. But they can’t demand the same PGA Tour membership benefits, considerations, opportunities and platform as you. That expectation disrespects you, our fans and our partners. You have made a different choice, which is to abide by the tournament regulations you agreed to when you accomplished the dream of earning a PGA Tour card and – more importantly – to compete as part of the preeminent organization in the world of professional golf.”

Here’s the real issue: The players above aren’t just going over to LIV because it’s something new and interesting.

Many of these guys have storied PGA careers, and a few of them – like DeChambeau, Johnson, and Gooch – are still at or near the tops of their games.

LIV Golf is compelling to such players for several reasons, but of course the main one is money. That much is true.

However, the PGA acts as if its players owe them for the privilege of playing under the PGA banner. But what the PGA doesn’t do is actually pay their players.

There are no PGA contracts for these guys. It’s just a promotion. Whatever you win of the weekend’s purse is what you get. And if you’re in the top 50 or so, you might be able to cash in on some endorsements, too. That’s it.

LIV gave Phil Mickelson a reported $200 million just to play in its tournaments on the same courses – and on the same general schedule – that he’s already used to.

Plus, Lefty is still eligible to win whatever part of the event purse he can if he finishes in the money.

Ditto for Johnson, who signed a reported $125 million contract to play for LIV. DeChambeau will be getting $100 million or so, and even players on the back nines of their careers – like Poulter ($20-$30 million) and Westwood ($20-$30 million – are making out like bandits.

Per Westwood, when interviewed about LIV Golf in 2021:

And this is just the beginning.

If the PGA isn’t careful – and if the league indeed bars PGA pros from action if they also tee it up for LIV Golf – here’s what might happen in the not-too-distant future:

LIV Golf – which has deep Saudi oil pockets – will siphon off all but the very top of the PGA talent pool. That is, players ranked from just outside the PGA top 10 all the way to the top 50 or so will be offered more than enough money to make it worth their whiles – or worth their wiles – to switch carriers.

Only those players at the very tops of their games – and those who are, for all intents and purposes, chasing PGA records or have lucrative sponsorship deals that might be jeopardized if they jump ship – will stay.

Tomorrow’s PGA might well look like this: The 10 best players in the world, a few rookies looking to strike it rich with an LIV contract, and a bunch of scratch golfers rounding out the rest of the field.

And that will get extremely uninteresting for viewers – and bettors – very quickly.

Meanwhile, all the truly competitive golf – and thus the truly engaging online golf betting – will be dominated by LIV. And after a year or two of that, the sponsors – which are the backbone of the PGA when it comes to player retention – will switch leagues, too.

To be sure, the PGA Tour isn’t dead, and LIV Golf won’t kill it. But a salty Rory McIlroy isn’t going to singlehandedly save the league’s number-one status, either.

Of course, the 2022 US Open does start tomorrow, and the PGA has retained enough talent – for now – to make things mostly business as usual.

But even as the storied major plays out, the major story will undoubtedly be about LIV Golf, not US Open golf.

So enjoy the competitive betting lines while you can, because this might be the last time for a long time that PGA odds will be any kind of interesting.