The Honkening: A Wake-Up Call For Crypto Betting? 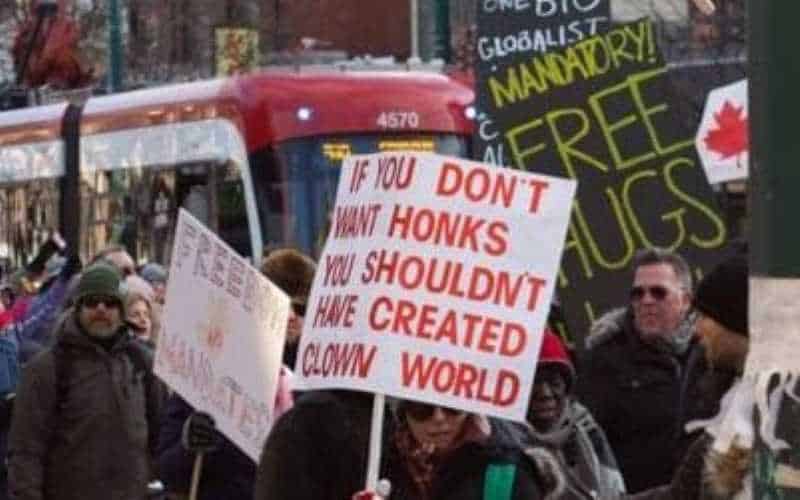 Normally here at SBL, we try to stay out of politics.

At least, we try to stay out of politics unless we’re actually covering political odds or politically relevant current event odds and the like.

And even then, we’re not trying to rock the boat.

We might play the part of the cynic and break down the odds in a way that can seem something other than totally neutral, but our intent is to try to read the crowd and tout accordingly.

With that in mind, this one might be a tad more political than we’re used to. People, naturally, are going to be firmly on one side or the other of this thing.

Still, our purpose is to explain and – even more than that – extrapolate. That way, we can give you some actionable advice.

Now, most of you will be aware of The Honkening™ up yonder in Canada.

The so-called “Freedom Convoy” has – over the last two weeks or thereabouts – attained global meme status, and many such movements are revving up and “breaking down” worldwide.

In Canada, the OG Freedom Convoy has been called an “insurrection” by various insane politicians and has elicited calls for military intervention, imprisonment, and worse on the “perpetrators” of the protest.

Of course, the optics of sending in the heavy guns against a bunch of guys and gals in big rigs honking their horns and having barbecues in the street probably isn’t going to fly.

Police have been unable to make enough arrests to clear the major commerce thoroughfares, and there seems to be no appetite to actually slaughter these doofy truckers on a thousand different worldwide livestreams.

However, you must always follow the money. And that’s what’s habbening now.

First, GoFundMe violated its own terms of service and shut down contributions to our friends up north. Then, niche Christian crowdfunding site GiveSendGo was forced offline after receiving nearly $9 million in donations for the Freedom Convoy.

Even worse, GiveSendGo’s donor database was hacked and every donor was doxxed on Twitter while the list was gleefully disseminated by bluechecks with impunity (all as Twitter, naturally, refused to enforce its own TOS and take down the offending tweets).

All this is certainly sketchy enough, but the money trail didn’t stop there. And that means that the attempts at suppression didn’t, either.

Indeed, the Canadian government actually followed the trail to its logical conclusion.

In short, PM Justin Trudeau invoked the Canadian federal government’s Emergencies Act for the first time in the nation’s history.

As part of that, the government is going to freeze the bank accounts of all protest participants who refuse to pack it up and pack it in posthaste.

Effectively, the Canadian government attempting to seize private monies to “starve” the protest out.

To their credit, the truckers don’t appear to be playing ball.

Apparently, it’s pretty hard to make someone who lives on coffee and Vienna sausages in 10 square feet of space 24 hours a day really uncomfortable.

Nevertheless, the threat of shutting down these truckers’ access to their own money has resulted in calls for a “bank run” on the Canadian financial sector.

That is, supporters of the protest – all over the nation and even internationally – are encouraged to withdraw the totality of their holdings from their Canadian bank accounts.

As banks don’t have nearly enough physical cash to meet such demands – even if the bank run nets just 5% participation – such an event would grind the entire economy to an immediate halt.

But that got us thinking: Is it really such a good idea to use cash for anything in this kind of political climate? Is it really a smart move to use credit cards and debit cards as the sole points of access to your liquid wealth?

Well, that really depends on several factors, not the least of which are going to be your political leanings. Of course, we’re definitely not here to tell you how to vote and what to think.

But we’ve been gambling online for decades.

We were here when the Internet was new and there was no real stigma associated with online sports betting because the market was so out of the mainstream that everyone involved effectively flew under the radar.

We were here when online betting – particularly online poker – thrust itself into the spotlight in the early 2000s and brought with it an inundation of anti-gambling PSAs, lobbies, and laws.

We were here when Black Friday happened in 2011 and every domestic online gambling site closed up shop and legged it offshore.

We were here when New Jersey finally appealed PASPA to the Supreme Court and got it tossed in 2018.

And we were here when state after state passed sports betting legalization and gambling expansion seemingly nonstop ever since.

Nobody’s breaking any US gambling laws, but if funds can be interfered with at any ruling body’s whim, it’s not totally inconceivable that new initiatives could be unveiled – sometime in the future – that make the UIGEA look like kid gloves.

To be clear, we don’t expect that.

However, we anticipate that some online gamblers – particularly new sports bettors in the under-21 crowd – might be spooked by all this.

Fortunately, there are some safeguards you can employ.

The most obvious one is to bet with Bitcoin or another supported cryptocurrency.

While the top online sportsbooks don’t support truly anonymous coins like Monero, crypto is generally a much more private and less readily traceable way to move money to and fro over the Internet.

That said, you should never be emboldened to use crypto to break the law, and we’re definitely not recommending that.

But crypto is more private than fiat currency.

Yes, it can still be traced, but it can’t be hacked by any known means, and transactions are substantially safer.

Additionally, the blockchain itself can’t be shut down. That is, a government can’t actually seize your crypto nearly as easily as it can your bank account.

Of course, to cash out your crypto requires access to a bank account in most cases, and that’s a legitimate chokepoint to be aware of.

It’s a harder chokepoint to get a handle of for the powers that be (simply because there are more variables involved), but it’s a chokepoint nonetheless.

At any rate, we aren’t trying to scare you into using crypto to bet online if you don’t want to, and we’re not trying to get you to abandon credit/debit.

Convenience is always king, and we use our credit cards and debit cards for all kinds of things every day.

Besides, all the sports betting banking options supported by the sites we recommend are still safe and secure for all users in the United States, Canada, and elsewhere.

Our goal, ultimately, is to merely remind you that your lifestyle can be turned on its ear at any time, for any reason, regardless of your intentions. It’s a good idea to always be prepared.

What’s the solution to all this?

Right now, there really isn’t one.

When it comes to pure anonymity of financial transactions, crypto isn’t a cure, it’s a Band-Aid.

One strategy you can use today – and one that we’ve used for years (and not for privacy or potential loss mitigation but for simple old bankroll management) – is to keep your gambling funds in a separate bank account from your regular bank account(s).

Draw all your gambling related funds from this account only, whether you’re using your cash to buy crypto with which to bet or are simply depositing your funds directly with credit, debit, check, bank wire, money order, etc.

Never deposit more money into this account than you can afford to lose, and never gamble with money from your other accounts.

We’ll keep ruminating on this and share any new ideas for increasing the security of your online/electronic finances we might have going forward.