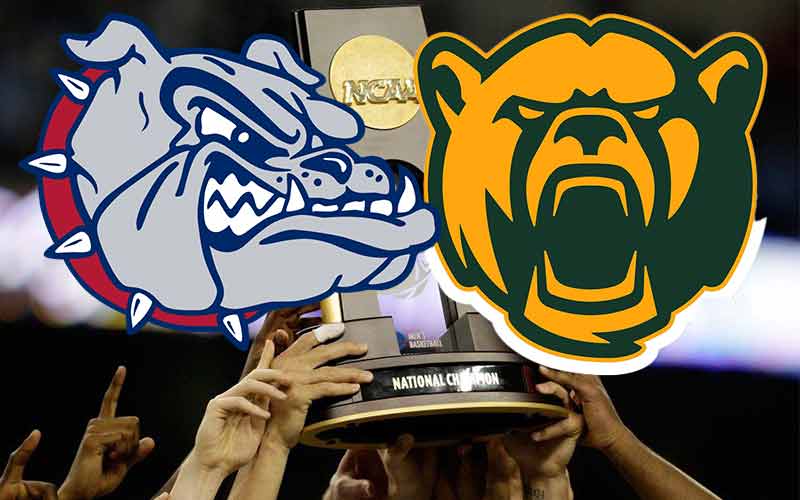 Tonight at 9:20 PM, the Gonzaga Bulldogs and the Baylor Bears will throw down on the hardcourt, and the winner will receive the grandest prize in college basketball – the 2021 NCAA Men’s Basketball National Championship.

Both teams share the destiny of participating in the 2021 NCAA Title Game, but their Final Four semifinal routes were in direct contrast. The Bears covered the spread easily over the Houston Cougars, taming them by a final score of 78-59.

The UCLA Bruins vs. Gonzaga Final Four game went to overtime where in the closing moments, the Bulldogs nailed a half-court three-pointer for the win as the clock expired.

Gonzaga is still alive in the odds at March Madness betting sites, and a win tonight will pay out those that risked some coin on their preseason championship futures. They’ve been favored to win it all since the odds debuted, and early bettors are hoping they’ll cut down the nets following this evening’s National Championship.

The Bulldogs had covered in every NCAA Tournament until the Final Four. Online College Basketball National Championship sportsbooks are favoring Gonzaga to win tonight’s game by at least 4 points, which is their closest predicted margin so far in the 2021 tourney.

When two teams compete for a title in any sport, it goes without saying that everything is on the line. In the case of tonight’s NCAAB Championship, college basketball legitimacy is at stake.

Both Baylor and Gonzaga are considered basketball schools and are not known for their prowess in the realm of other collegiate athletics.

Gonzaga in particular has routinely qualified for the NCAA Tournament and advanced deeply in most years, but has yet to achieve their ultimate goal of etching their name into a championship trophy and solidifying their legacy.

The 2021 March Madness Tournament marks the first time that Baylor has reached the Final Four, and their money line odds to win at college basketball sportsbook sites is currently hovering around +165.

Considering the dominant and impressive run that Gonzaga currently on that includes a historic buzzer-beater Final Four victory over the 11-seed UCLA Bruins, even more impressive is the fact that Baylor has pulled so close in the money line odds and in the point spread.

With their blowout of Houston two days ago, Baylor could be sneaking into NCAAB Championship Final under the radar. A wager of $1 on them to straight-up win the game will earn bettors $1.65.

The over under suggests a high-scoring affair, and if oddsmakers are accurate, the final result will be somewhere in the neighborhood of Gonzaga 82, Baylor 78. If you think that Baylor can outshoot the Bulldogs and win the 2021 NCAAB Title, then get in on these profitable odds prior to tipoff.

If you’re not confident in the above March Madness betting line as it currently sits, in-game betting is possible with live NCAAB odds that allow for action while the clock is running.  Be sure to tune in tonight on CBS to watch Gonzaga vs. Baylor.