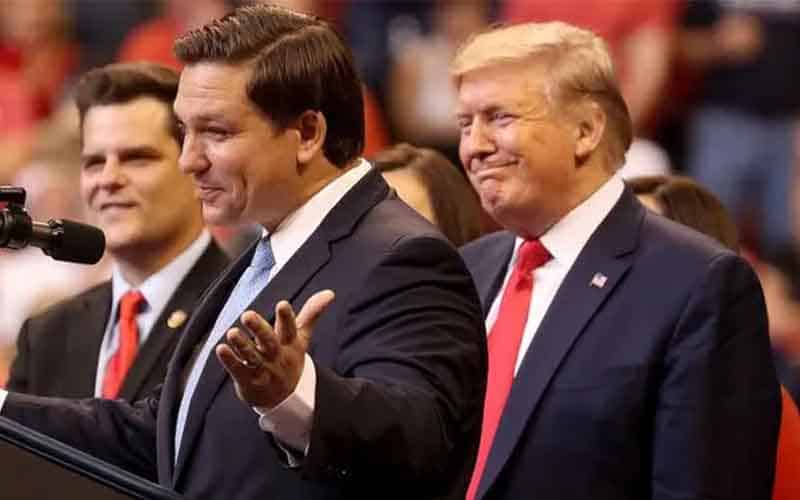 Last night, the Congressional hearings regarding the January 6th US Capitol invasion convened until September, but the damage may have already been done in regard to Trump’s reelection chances in 2024.

It’s no secret. Florida Governor Ron DeSantis has been a rising star in the GOP since Donald Trump’s rise to power.

Since President Biden’s victory in 2020, Donald Trump and DeSantis have been ranked first and second in the 2024 odds posted for legal election betting. Until recently, the separation between them in the odds suggested it was Trump’s election to lose.

As the public hearings of the US House Select Committee on the January 6 Attack carried on, we noticed the 2024 Presidential election odds begin to narrow between Trump and DeSantis.

That trend continued through last night’s final hearing before the committee reconvenes in September, with the separation in the moneyline now a mere 100 points apart.

Just to be clear, political prop bets are not an accurate indication of the eventual winner or loser of a particular election. They simply reflect the betting action of the public as of that day, as political sportsbooks must shift the odds to keep bets coming in evenly for each outcome.

Still, bettors wager with their minds and not their hearts when money is on the line, so even a staunch Trump supporter would be forced to bet on DeSantis if they believe he will win.

At this point, the question is not whether Ron DeSantis will win the Presidency in 2024. That seems like a foregone conclusion should he secure the Republican Party’s nomination based on the following political betting line.

US Presidential Election Odds For The Winning Party In 2024

Whether or not Donald Trump will be disqualified or drop out of the race prior to that time seems to be the lone parameter in play for any DeSantis outcome, but could the FL Governor be plotting an overthrow among GOP leadership?

It is tough to find a sliver of good news for Trump’s camp coming out of the January 6 Hearings, and the midterm election ballots will be weeks away from being cast when the Committee gathers again.

It could be a sound strategy for DeSantis and company to make a preemptive strike now instead of waiting for the outcome.

Speaking of waiting, it seems that Trump is content to stand by as the Committee Hearings proceed, clinging to the hope that he somehow comes out unscathed.

The 2022 midterm election odds indicate a strong possibility of a GOP-controlled US House and Senate, paving a clear path for Trump’s return to power in 2024.

Betting on the 2024 Presidential Candidates will remain open until a winner is declared, but perhaps the most profitable time to lay some action on Trump’s odds are right now when doubt is at its peak.