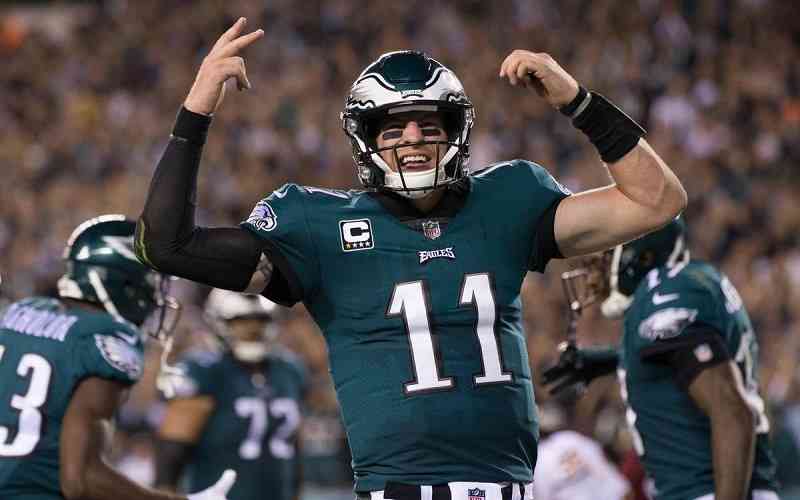 It seems like each time a team inside of the NFC East division has a chance to go legit and become a respectable franchise, they go out and tank to another divisional opponent and maintain the chaos.

The NFL’s Week 10 slate of games contains an NFC East matchup that has the potential to place one team at the top with a record that is not under .500.

NFL sportsbooks believe that the Eagles will indeed achieve this lofty goal of becoming mediocre and win on the road against the Giants this Sunday.

Second-year running back for Philadelphia, Miles Sanders, appears as if he will suit up for this weekend’s NFC East matchup. It was initially feared that Sanders would be forced to miss the game due to a lingering knee injury that has kept him out of the Eagles’ last two contests.

Standout WR Alshon Jeffery has participated in his first practice of the 2020 NFL season and looks to be ready for his first game action as well.

The Eagles are healthier than they’ve been all year and have the opportunity to jettison themselves into a nearly impenetrable lead in the once competitive NFC East.

If they can get it done and win against the underdog Giants, they’ll find themselves in the enviable position of readying themselves for the NFL playoffs – a laughable notion for a team that would potentially be 4-4-1.

The Dallas Cowboys were underperforming even when their roster was at 100% health. They have been mercifully granted a bye week by the football gods so that they can at least field a well-rested if not talented roster in Week 11 and attempt to improve on their dismal 2-7 record.

The Washington Football Team will face the Detroit Lions in Week 15 but for some reason, there are no odds at any of the premium sportsbooks that we refer to for NFL betting lines.

Washington quarterback Kyle Allen has been lost for the season following a Week 9 ankle injury which has cleared the way for Alex Smith to return to the lineup.

D.C. is the only team that is within striking distance of the Eagles, and they’ll be rooting for the Giants to muster up the intestinal fortitude to pull off the upset.

But still, why are the odds for the Lions vs. Washington game removed from the boards?

Sportsbooks are always looking to take action on NFL games, so the removal of the odds for Detroit and Washington can only mean one thing – the risk outweighs the reward.

Betting sites aren’t willing to stick their neck out and accept bets when they can’t get a good gauge on the matchup. If oddsmakers are laying off, then bettors should, too.

Based on what we can scrape from the web, here is the most recent line for D.C.’s game against the Lions.

No matter what, one of these unspectacular teams will be awarded a win and it may as well be Washington so that the NFC East can remain in play.

Both the Lions and Washington have upcoming Thanksgiving NFL football games, but only one of them has the chance to be pertinent to NFL playoff seeding. With that said, we should all be rooting for a Washington victory this weekend.  Our Thanksgiving football depends upon it!