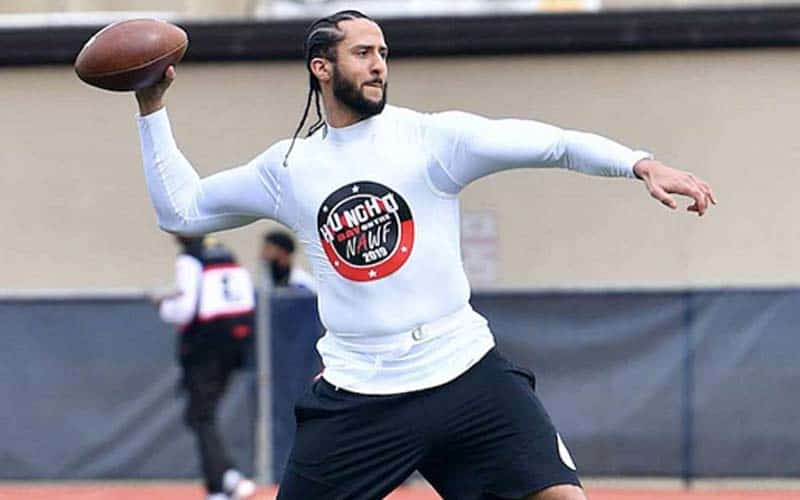 Depending on who you ask, Colin Kaepernick can be described as the most influential or infamous player in NFL history.

With his 4.0 GPA at the University of Nevada, Kaepernick was a student-athlete standout, becoming the only collegiate player to ever amass 10,000 passing yards and 4,000 rushing yards.

Kaepernick was then drafted by the San Francisco 49ers in the second round of the 2011 NFL Draft where he played until opting out of his contract in 2016. As an NFL starter, the Wisconsin native went 28-30.

After going unsigned following the 2016 season and a subsequent lawsuit accusing the NFL of colluding to keep him out of the league, Kaepernick is reported to be working out for a few teams.

Although the franchises to attend were not confirmed by the NFL, Kaepernick held a private workout on Saturday in Atlanta in hopes of returning to his football career.

I’m just getting word from my representatives that the NFL league office reached out to them about a workout in Atlanta on Saturday. I’ve been in shape and ready for this for 3 years, can’t wait to see the head coaches and GMs on Saturday.

Based on the NFL betting odds, however, it appears that the Cincinnati Bengals will be one team to appear at the workout as they have the best odds of signing the free agent this season.

With +350 odds and an 0-9 record, Cincy is a likely landing spot for Kaepernick.

Andy Dalton was recently benched in favor of rookie QB Ryan Finley, so the team might want to see what they have in their fourth-rounder. But adding Kaepernick to the roster could provide the team a better backup option than Dalton.

The Pittsburgh Steelers have the next best odds on Kap with +400 chances in 2019. Under backup Mason Rudolph, the team is 5-4. If nothing else, Kaepernick could add some explosiveness to the team’s mediocrity.

Even if Kaepernick is signed by an NFL team, there’s no guarantee he will play this season. According to oddsmakers at BetOnline, there’s a -2500 chance the QB plays this season.

Will Kaepernick play a game in the 2019 regular season?

The odds he plays in 2020 are a little better though. Although there’s still a projected 87.47% chance Kaepernick does not play next season, the odds that he actually does tops out at +500.

Will Kaepernick play a game in the 2020 regular season?

Since 2016, Kaepernick has been known more for his activism than his play on the field. During the preseason of the same year, Kaepernick began sitting during the National Anthem.

He continued this until he began kneeling during the anthem out of respect for military veterans following a conversation with former NFL player and Green Beret Nate Boyer.

When asked about his actions, Kaepernick explained that he was protesting the oppression of African-Americans by police.

“I am not going to stand up to show pride in a flag for a country that oppresses black people and people of color. To me, this is bigger than football and it would be selfish on my part to look the other way. There are bodies in the street and people getting paid leave and getting away with murder.”

The protest caught the attention of fellow players, analysts, team owners, and fans, many of whom applauded Kaepernick for his stand against racism in America.

President Donald Trump, on the other hand, did not like with the quarterback’s protest, even going as far as to say that NFL teams should fire contracted players that kneeled during the anthem.