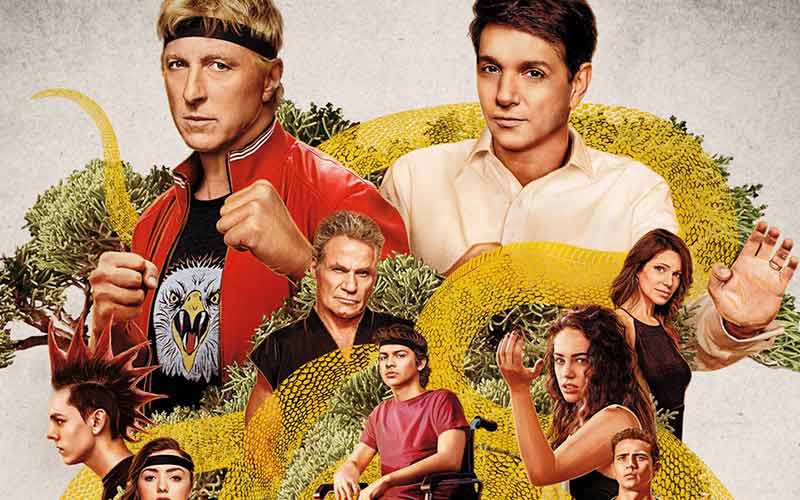 It is safe to assume that everyone living in the United States during the 1980s is familiar with the film Karate Kid starring Ralph Macchio as Daniel, a New Jersey transplant coping with his new high-school existence in sunny Southern California.

When Daniel meets Ali, he is also introduced to her ex-boyfriend, the muscle-headed Johnny (William Zabka) who is also an expert at Cobra Kai Karate. It all comes to a head where Johnny and Daniel settle their differences at the All-Valley Karate Tournament, but it seems there are still some unsettled scores that need attention 35 years later.

Flash forward to modern day and Johnny is a down-and-out loser who tries to revamp his life and career by opening up the Cobra Kai dojo and taking on new students. Meanwhile, Daniel is the owner of a successful car dealership, but is drawn back into the battle with Johnny when their kids become embroiled in a heated rivalry.

Cobra Kai is now entering its 4th season which is expected to debut on Netflix between October and December this year, but entertainment betting sites are already all-in on this Karate Kid spinoff and have produced odds for tournament winners and special guest star appearances.

The above entertainment prop bet for Cobra Kai Season 4 asks which dojo will be victorious and take home the trophy at the All-Valley Tournament. Season 3 ended with three active factions in play, so entertainment bettors will need to project the best intentions of the script writing team and lay some action on the dojo they think will win.

The early edge has been granted to Myagi-Do Karate led by Daniel and his daughter, Samantha.

Over the course of the three prior seasons of Cobra Kai there has been no shortage of guest stars and cameo appearances from characters that were a major part of the original Karate Kid film series. We hesitate to declare it a trilogy because of the Next Karate Kid film that starred Hillary Swank, or the remake.

After toying around with audiences for nearly three full seasons, Ali with an “I” finally showed up and encountered Johnny and Daniel once again. Will she or another Cobra Kai cast member appear in season 4 and surprise viewers?

The following entertainment betting line offers odds on potential guest stars for season 4, and Elizabeth Shue (Ali) is currently leading all others, with Robinson and Hauser, both from Part 3, following closely behind.

Sorry Next Karate Kid fans, it looks like Julie Pierce is a long shot for this season but the series is not showing any signs of slowing down so there’s hope for the future.

Cobra Kai is also listed in the options for betting on the 2021 Emmy Awards as the show is nominated for Best Comedy Series, albeit an incredible underdog.

The above entertainment odds for Cobra Kai and the 73rd Emmy Awards will remain on the boards until each show begins, so consider taking advantage of the profitable moneylines now.