Win A Share Of $500,000 Picking NFL Point Spreads At BetOnline 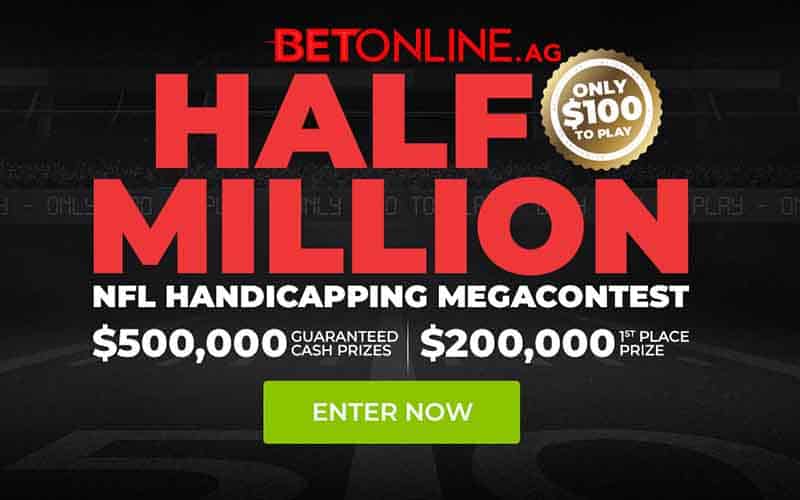 One of our best-rated online sportsbooks, BetOnline, is running a contest that awards the top 200 winners with a share of $500,000 in cash prizes.

BetOnline’s MegaContest takes place from the first week until the conclusion of the NFL season and allows contestants to accumulate points by making correct picks against the spread.

Registration is open now through September 12th, but NFL betting selections should be made prior to the first game of the season on September 8th to give yourself the best shot at winning a portion of the cash prize.

BetOnline members must make five picks against the spread during all 18 weeks of the NFL season. These NFL point spreads can be locked in at any time prior to the start of the game, so it is advantageous for members to monitor the lines and pounce when it looks right.

Each correct point spread selection is worth 1 point, while pushes will reward a half point. Only one team in a given matchup can be selected. This is to keep contestants from securing a guaranteed win by betting on both sides of the action.

Once Week 18 of the season concludes, all points will be tallied, and cash payouts will be divided among winners along the following schedule:

The best part is that none of these cash prizes have any rollover terms attached. We say that because often, betting sites will reward in bonus cash where completion terms must be met before any withdrawals can be requested.

Entry fees are collected directly from BetOnline accounts and do not require a new deposit. If you are making a deposit, be sure to investigate BetOnline’s sportsbook promos before finalizing the transaction.

Another perk of this MegaContest from BetOnline is that a $100 investment keeps the action going for 18 weeks. It helps online NFL gamblers remain informed of all the betting lines and resulting outcomes so that well-researched wagers can be placed outside of this contest.

Another contest that BetOnline has brewing for the upcoming NFL season allows members a shot at a $200,000 grand prize, or a share of it if there are multiple entrants alive after Week 18 is in the books.

Members can enter up to 25 times, and once again, fees deescalate from $30-$10 as more are purchased. Here’s how to play:

Both contests can be entered right now, so consider joining over at BetOnline.AG if you have not already.