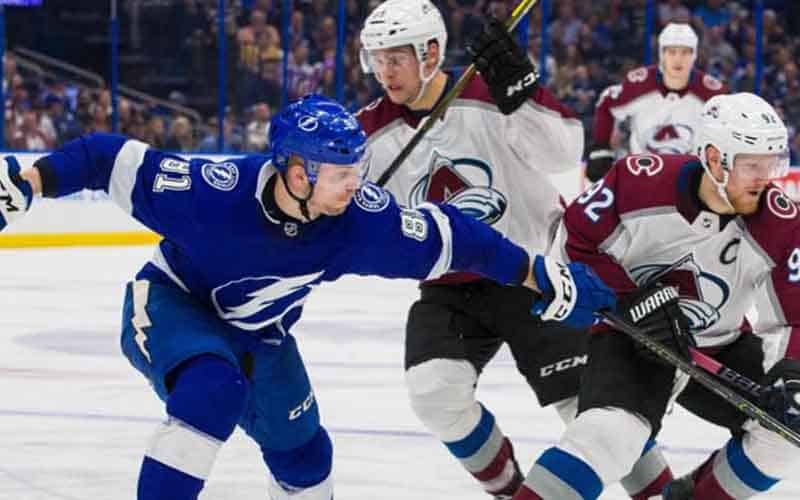 The Tampa Bay Lightning will continue their quest to become the NHL Stanley Cup champions for the third year in a row when they match up against the Colorado Avalanche in Game 1 this Wednesday night.

NHL betting sites are still favoring the Avalanche to win in their Stanley Cup series prices and also suggest they’ll be the victor in Game 1.

The Lightning were not projected to make it out of the first round at online NHL Playoff sportsbooks but they were able to best the favored Toronto Maple Leafs in seven games.

Tampa then went on to take out the Florida Panthers in a four-game sweep in round 2, eliminating the highest-ranking team in the Eastern Conference according to the NHL betting futures at the time and for most of the season.

Things got murky when the Lightning fell into a tw0-game hole in the Eastern Conference Finals against the New York Rangers who were attempting to write a Cinderella story of their own.

The next four games of the series were won by the Lightning, jettisoning them into the 2022 Stanley Cup Finals with a chance at a three-peat.

The Colorado Avalanche have been favored at legal Stanley Cup betting sites to represent the Western Conference for nearly the entire 2022 NHL season. They’ve only suffered two losses this entire postseason and have been resting since their overtime Game 4 win over the Edmonton Oilers on June  6th.

Have the Avalanche been on ice for too long? The Lightning are coming in red hot and their all-in defensive strategies have frustrated and overcome the best the East has to offer for the last several weeks.

There is no questioning the Lightning’s championship pedigree, either. Those that are interested in betting on the Lightning to win the 2022 Stanley Cup would be best served by shopping the odds for the best sportsbook payouts.

Bovada is offering the highest payout for a Lightning win at the moment with a +160 moneyline. A Stanley Cup bet of $100 on the Tampa Bay Lightning to win in 2022 would payout at $160 if they hoist the cup.

If you think Colorado will continue their dominant 2022 NHL Playoff run a be the first to win four games in this year’s Stanley Cup Finals, you’ve got two options to choose from because BetUS and BetOnline are offering the lowest moneyline odds to win at -175.

Stanley Cup bets of $175 will be required to net $100 on a Colorado Avalanche series win at either book. There is potential for the line to shift between now and Wednesday with the NHL Finals begin, but don’t wait too long to call your shot because these advantageous moneyline odds could slip through your fingers along with the potential winnings.