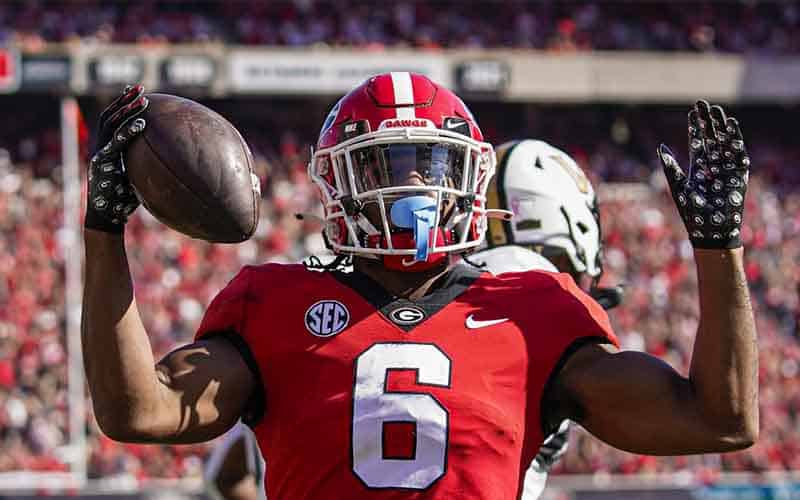 Tomorrow at 4:00 PM, Atlanta, GA’s Mercedez-Benz Stadium will play host to the 2022-23 SEC Championship Game between the LSU Tigers and the Georgia Bulldogs.

The Tigers have a chance to shake up the CFP rankings as well as the college football bowl game schedule by winning the SEC with three losses. That outcome is unlikely, however, and is reflected in the odds for college football betting tomorrow.

LSU stumbled early in the season to the Florida State Seminoles and lost a game in conference to the Tennessee Volunteers at mid-year, but then rallied to beat the Alabama Crimson Tide and take a commanding lead in the SEC West.

The Tigers clawed their way back into the National Championship picture, earning a ranking of 6 and were perhaps a conference title away from inclusion in the CFP.

Those hopes were dashed when the Tigers lost for the third time to the Texas A&M Aggies, but they still find themselves in the SEC Championship Game, facing the top team in the nation – the undefeated Georgia Bulldogs.

The above SEC Championship Game betting line favors the Bulldogs by a point spread of -17.5, an unusually large margin for what is often a competitive pairing of top college football programs.

The Bulldogs are undoubtedly the top team in the country according to the rankings and the futures for CFP betting. There’s a definite possibility that Georgia could qualify as one of the final four College Football Playoffs teams even if they lose to LSU.

In fact, only 6 NCAAF programs remain within contention for a National Championship, according to the current CFP odds posted at Bovada Sportsbook.

These odds for betting on the College Football Playoffs National Championship reflect two realities – the LSU Tigers have no shot at beating the Georgia Bulldogs, and even if they do win, they will not be included in the final CFP bracket.

Somehow, the Alabama Crimson Tide are still players for the CFP, but how? Perhaps a USC Trojans loss to the Utah Utes tonight, combined with a TCU Horned Frogs loss to the Kansas State Wildcats tomorrow, could pave the way for Alabama.

It’s win and in for TCU, but USC can’t make it in unless the Horned Frogs lose. Both games feature betting lines with margins of a field goal or smaller, so TCU and USC are by no means obvious favorites.

If these pregame lines are not to your liking, in-game betting begins after the kickoff and lasts into the fourth quarter in most cases. The National Championship futures will remain on the boards until the CFP semifinals, but two teams will have been removed from the line by then.

Be sure to check back in with us next week when we cover betting on the CFP after the Selection Committee’s final rankings are issued this Sunday.