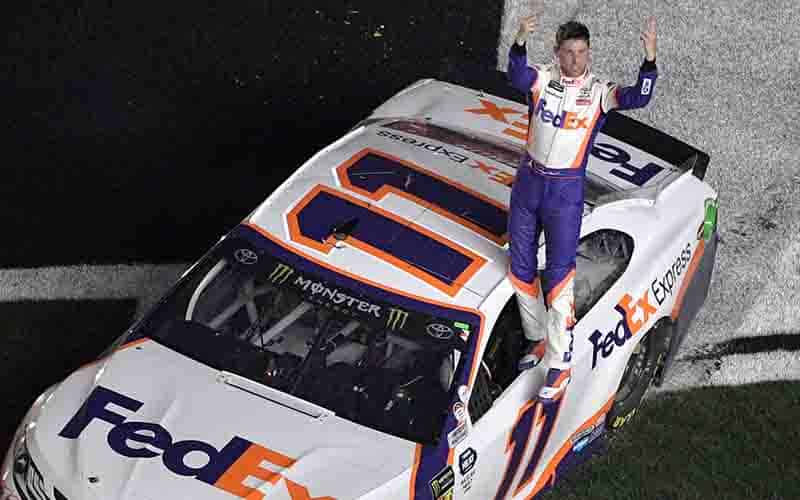 The first major event of the 2022 NASCAR season gets underway this Sunday at 2:30 PM and the Daytona 500 already has futures odds and prop bets on the boards right now.

The qualifying order for the Daytona 500 will be set this evening at 8:05 Eastern on FS1 (Fox Sports 1) where the top 10 cars will be narrowed down to the final two.

The first and second-place finisher in tonight’s Daytona 500 qualifiers will make up the front row and will receive an additional advantage in the odds for NASCAR betting this Sunday.

Below are the current futures for Daytona 500 betting that should be heavily considered prior to Sunday’s big race. The Reason?

After tonight’s qualifiers, these NASCAR futures will alter significantly. That means these Daytona 500 odds that are on the boards right now will not pay out as much this time tomorrow, so make haste.

Denny Hamlin is atop the leaderboard and is favored to win the 2022 Daytona 500. If Hamlin is the winner, it’ll be the fourth time he has done so at Daytona Motor Speedway and will place him in a two-way tie for second place all-time.

Despite the fact that Hamlin is favored to win, a NASCAR bet on his +850 moneyline odds will net $8.50 for each dollar wagered if he crosses the finish line first on Sunday.

The profit margins only go up exponentially for each additional driver listed below Hamlin and climb to 20-to-1 net payouts once venturing outside the top 10.

There are NASCAR odds for every driver that will participate in this weekend’s Daytona 500 race, we’ve merely offered the top handful that have been posted for betting over at Bovada Sportsbook.

Also at Bovada are Daytona 500 prop bets offering dozens of angles for wagering on a race-within-a-race pairing up drivers and groupings and adding to the overall action.

Here are a few examples of the NASCAR prop bets that Bovada has posted right now.

There are also Daytona 500 futures that list all drivers and are taking action on top 3, 5, 10, and 20 finishers. All that is required is that NASCAR bets be placed on any driver that achieves said goal and a payout will be earned, but the moneyline odds are much lower than the overall futures due to an easier path to victory being provided.

If you are new to NASCAR gambling, check out our guide on how to read betting odds to gain more insight on what all these Daytona 500 odds mean prior to this weekend’s race.