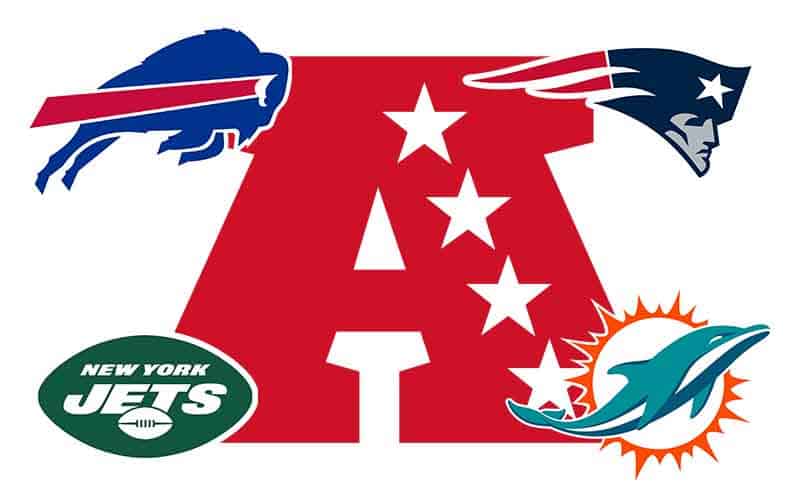 Over the next few weeks that lead up to the onset of the 2022-23 NFL season, we will be combing through each division in professional football and giving our take on whether we agree with what the betting odds have to say.

NFL betting sites have more confidence in the completion of the regular season schedule now that we are two years into the COVID0-19 pandemic, resulting in game lines that stretch all the way into the month of November.

Combining the betting lines for each available game as well as the divisional, conference, and Super Bowl 57 futures allows for a unique perspective on what the upcoming season has to offer. In this case, we’ll see how these NFL odds forecast the final standings in the AFC East.

The Bills were the AFC East champions in 2021-22 but fell to the Kansas City Chiefs in a heartbreaker during the divisional round of the playoffs. This year the NFL futures suggest that the Bills will not only repeat as division champs, but they will go all the way and win Super Bowl LVII.

They are currently holding a moneyline of -235 which places them 660 points ahead of their nearest competitor, the Miami Dolphins. Betting on the favorite often provides a difficult path to earning a profit as a bet of $2.35 will net a $1 victory if the Bills win the AFC East.

While it may seem like a no-brainer that the Bills will take the division again, don’t sleep on the reloaded Dolphins or those pesky New England Patriots that never seem to be out of the hunt.

The personnel of the Miami Dolphins has been significantly upgraded across the board, but it may be too much to ask for this nucleus of players to gel in the first season under a brand new head coach.

The elephant in the room is QB Tua Tagovailoa. If he simply puts in a similar performance to last season, expect Miami to move on and continue their search for a new quarterback through either free agency or next year’s draft.

We’re not convinced that Tua is the answer in Miami and expect them to struggle early on as they search for an identity.

The Patriots were able to make the NFL Playoffs last season with rookie quarterback Mac Jones under center, but for some reason, the pro football oddsmakers are not anticipating a repeat performance in 2022-23.

We really like the +500 moneyline AFC East odds for betting on the New England Patriots and advise that readers consider a low-dollar hedge before the sportsbooks get wise.

New England actually beat the Bills in their house last season and we see no reason to believe that they will not be a better team when they walk out of the tunnel in Week 1. Look for Bill Belichick and the Patriots to put in solid work this year and finish no worse than second in the AFC East.

Most of the press coming out of the Jets’ camp these days involve the rumors surrounding second-year QB Zack Wilson’s love life and whether or not he hooked up with his mother’s best friend.

New York finished 4-13 last season and their 2022-23 schedule does not offer any easy wins. Look for the Jets to finish in the basement of the division, and bet on that outcome if you can find a line that supports it.