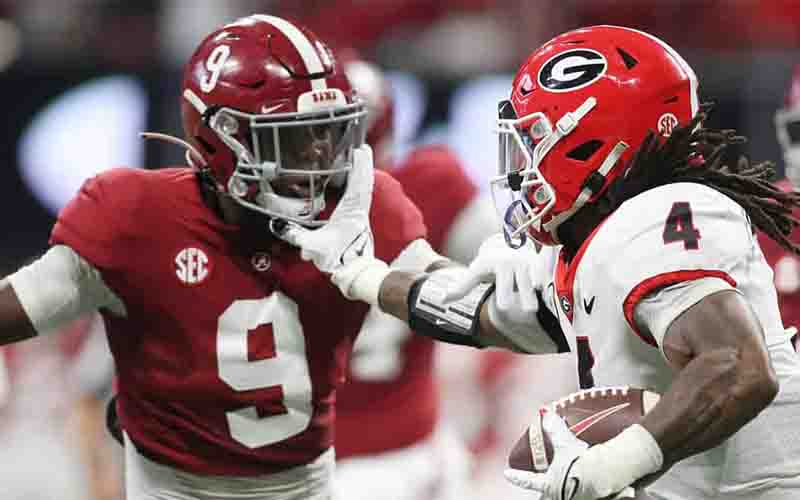 Next Monday night in Indianapolis, Indiana’s Lucas Oil Stadium, the number 1 overall Alabama Crimson Tide and the third-ranked Georgia Bulldogs will play each other for a second time to decide the winner of the CFP National Championship.

One month ago on December 4th, Alabama upset Georgia in the SEC Championship Game by a score of 41-24, capturing the Crimson Tide’s second conference title in a row and a trip to the College Football Playoffs.

Last Friday, Alabama and Georgia delivered on the odds presented at NCAA College Football betting sites that favored both programs to advance beyond the semifinals and face off once again.

The Crimson Tide and Cincinnati Bearcats played close early on in the Cotton Bowl, but Alabama slowly continued to place points on the board while holding their opponent to limited opportunities.

The final score of 27-6 was a welcome sight to those that wagered on Alabama to cover the 14 point spread at CFP betting sites.

The same can be said for savvy gamblers that laid some action on Georgia to cover the 6.5 points against the Michigan Wolverines in the Orange Bowl.

The Bulldogs were able to take care of Michigan by a score of 34-11, and are now poised to take revenge on Alabama for their loss in the SEC Championship Game.

Georgia was favored by -6.5 in their previous matchup on December 4th, but the Bulldogs were unable to defeat Alabama for the SEC Title.

The University of Georgia is once again favored against Alabama, but this time the spread has been narrowed to a three-point margin, suggesting a close contest this go-round.

Here is the current CFP National Championship betting line that is taking action at Bovada Sportsbook.

The above line for betting on the CFP National Championship Game projects to a final score of Georgia 28, Alabama 25 when combining the point spread and the over/under.

Of course, the above moneylines, spreads, and over/under totals must be taken advantage of now in order to secure the payouts that are currently on the table.

For instance, CFP betting lines were much closer to even when they debuted following the conclusion of last week’s Cotton and Orange Bowls, with some sites favoring the Bulldogs by a single point.

ESPN is reporting that much of the action has come in on the Georgia Bulldogs since those lines debuted, causing a shift across the boards that have now settled on Alabama as a three-point underdog.

NCAAF bettors that believe Georgia is going to win could have taken advantage of an additional two points of variance by placing their wagers last Friday evening as opposed to today.

Paying attention to the movement of the point spreads is similar to tracking the stock market and pouncing once the value hits a number that the buyer or bettors are comfortable with.

The major difference between stocks and betting on College Football is that the date of the final contest in NCAAF is a known variable, so gamblers are aware that there is a running clock that removes all opportunities for investment when it expires.

Don’t let the CFP Championship betting clock expire on you – get your bets in now!