2021-22 AFC North NFL Betting Preview: Is It Time To Crown The Browns? 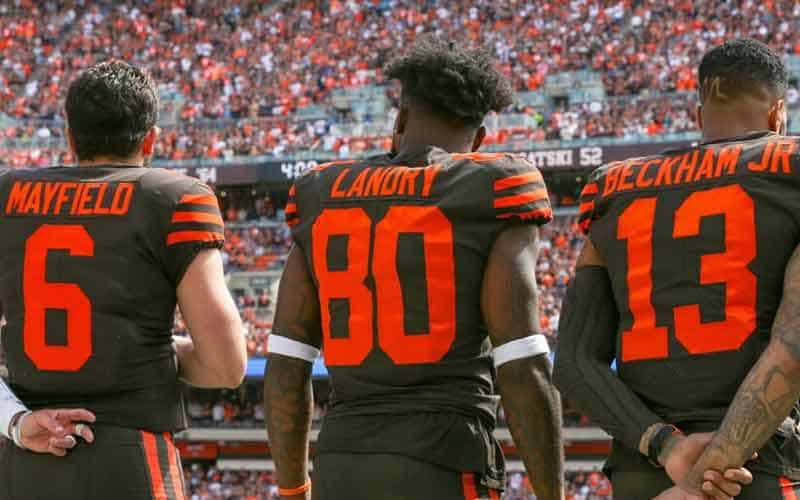 The late Tom Petty once crooned, “the waiting is the hardest part,” and that certainly rings true in the city that houses the Rock N’ Roll Hall Of Fame, Cleveland, Ohio.

Cleveland does indeed rock, and local sports fans have been treated to championships in recent years from their beloved Cavaliers of the NBA and the newly re-named Guardians of Major League Baseball, but what’s up with the Browns?

They are among the 12 remaining NFL teams that have yet to win a Super Bowl. Could 2021 be the year that the Cleveland Browns hoist a Lombardi Trophy? Their first step is handling the battle-hardened AFC North.

Legal online NFL betting sites have posted futures odds for each Division, and once again the Ravens find themselves atop of the pecking order – with good reason. They’ve overtaken the Pittsburgh Steelers as the reigning champions of the AFC North featuring a young roster that’s built for the future.

The Ravens would likely run away with the Division this season if not for the glut of talent that litters the starting lineup of the Browns, and at least one online sportsbook is predicting that 2021-22 will be the year that Cleveland captures the AFC North.

We’re fans of consistency, and Baltimore is arguably the steadiest ship in the NFL at the moment. That said, we’re betting on the Ravens to win the AFC North, and MyBookie and BetOnline currently feature the most favorable moneyline at +140.

Baker Mayfield, Jarvis Landry, Odell Beckham, Jr., Kareem Hunt, Nick Chubb, Miles Garrett – this is not a listing of potential league-wide Pro Bowl selections. Nay, these are just some of the high-end players that serve as the cornerstone of the Browns.

Cleveland finally made a decent run into the postseason last year before losing to the Kansas City Chiefs in the Divisional Round, but they did so as a wild card qualifier and not by winning the AFC North.

When legally betting on the NFL Playoffs, it is tough to lay action on the Browns due to the aforementioned issues with consistency, but they are building off of a strong season and should enter this year with some reasonable championship expectations and extra swagger.

Bets made on the Cleveland Browns should be made at Bovada and the +150 odds they’ve posted.

Just last season the Steelers were flirting with a perfect 16-0 campaign, and now they’re the projected third-place team in the AFC North according to the latest NFL odds across the board.

Betting on the Pittsburgh Steelers to win the AFC North is usually a pretty safe wager, but oddsmakers must be citing the decline of Ben Roethlisberger as an elite quarterback as a reason for their third-place prediction. Not too long ago, a worn-down Peyton Manning was able to win a Super Bowl on pure veteran savvy, and “Big Ben” is by no means that far along from a physician standpoint.

We also like the addition of rookie running back out of Alabama, Najee Harris, and believe he will revitalize the Steelers’ offense this season. Our expectation is that the Steelers will compete for the final wild card spot while not threatening to win the Division.

Bets on the Steelers should be made at either BetOnline or Bovada and their +140 odds.

Second-year quarterback Joe Burrow has returned from injury in time for Week 1 and looks to build upon his impressive, albeit shortened, rookie season.

Burrow leads a youthful but largely inexperienced group of gifted players that are hungry to bring Cincinnati to the top of the AFC but they’ve got a Division full of grizzly opponents to contend with first.

The NFL moneyline odds have consistently placed the Bengals in last place in their 2021-22 AFC North predictions, however, Bovada has offered up +2000 odds that are a full 800 point separated from the nearest book.

We’re not buying in on the Bengals just yet, but if you’ve got a hankering to bet on Cincinnati to win the AFC North, do so at Bovada for 20-to-1 payout potential.