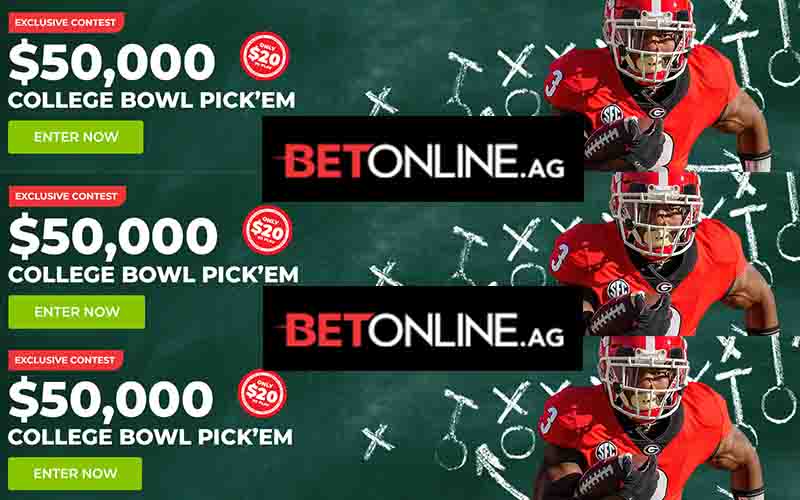 What better way to usher in four weeks of College Football Bowl Game betting than a pick’em contest that rewards the winner with up to $10,000 in cash prizes?

Top online sportsbook BetOnline agrees, and that’s why they are ponying up $50 grand in cash to dole out to the top 150 finishers in their College Bowl Pick’em Contest.

There’s no need to hesitate – up to two entries can be submitted right now. The first entry is $20, and the second (and final) submission is offered at a discount rate of $10.

For a total of $30, BetOnline members can take two cracks at making a series of successful bowl game picks, and if your college football betting instincts serve you well, $10,000 is at stake for the top finisher.

Don’t wait too long, however, as the contest stops accepting entries at 11:50 AM ET on the morning of December 28th.

Once the College Football Playoff National Championship Game concludes on January 10th, a final tally of points will be presented, and the top finisher will lay claim to $10,000.

If there is a tie, then prizes are split using a somewhat complicated formula – just check BetOnline’s website for the details. The prize breakdown is very generous, as even winners that finish between 76th and 150th place earn a hefty sum of $100.

In most cases, when online sports betting sites offer cash prizes for contests, there are at least some rollover terms attached that require betting through the winnings a certain amount of times prior to requesting a withdrawal.

BetOnline said to heck with the rollover, and allow for winnings collected in their College Bowl Pick’em Contest to be withdrawn immediately upon the funds being added to online bankrolls.

That said, winners can expect cash prizes to be deposited into their accounts within 72 hours of a CFP National Champion being declared.

BetOnline is currently offering the following futures odds for betting on the CFP National Championship.

The NCAAF sportsbook section at BetOnline also has College Football bowl game odds for each match-up occurring between now and the CFP Championship on January 10th, so take a moment to browse what they have to offer and use the lines to research your final picks in their $50,000 pick’em contest.

BetOnline is also offering up the following CFP odds that allow members to predict the exact outcome of the NCAAF Final and delivers massive moneylines that will grant substantial payouts if they occur.

What’s intriguing is that the above exact CFP outcome line favors a Georgia win, whereas the overall College Football Playoff futures suggests that Alabama will be victorious.

This is not only a prime example of the options in play when doing your legal sports betting business with BetOnline, but is also evidence of the payouts that they place on the table as each of the above options is paying out at 2-to-1 or better.