When will Nick Saban retire? Coach says ‘No time soon’ 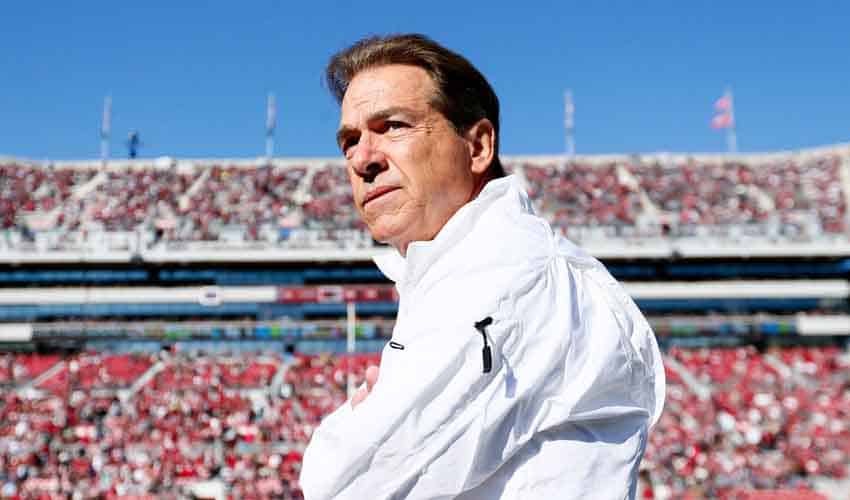 Nick Saban, the 67-year-old head football coach of the Alabama Crimson Tide, says he does not plan on retiring anytime soon. Nevertheless, MyBookie is accepting prop bet action on how many more seasons he will coach, along with which season will be his last overall.

When will Nick Saban retire?

When will Nick Saban retire?

These odds made their way to Saban’s attention. Before the start of the 13th annual Nick’s Kids charity golf tournament in Birmingham, Saban was asked about the bets.

“That’s the first I heard of that one, but it’s amusing…  No time soon. I don’t know what Vegas knows that I don’t know.”

Alabama believes in their coach’s longevity. Last year, the Crimson Tide gave Saban a contract extension through 2025, putting the coach into his 70s at the agreement’s end.

Oddsmakers say that Saban will finish out this contract before retiring. Calling it after the 2025 season has the best chances at +175 with anything after 2026 at +650. The over/under doesn’t quite mirror these odds, though: under 5.5 seasons, retiring after the 2023 season, is favored at -130.

However, playing over 5.5 seasons has +100 odds, so it’s not totally far fetched that Saban goes much longer than the predictions.

Saban’s age is somewhat rare in the head coaching realm. The Bama coach is the same age as the oldest coach in the NFL, the Seattle Seahawks Pete Carroll, and clocks in as the second-oldest coach in the NCAA, only behind the Ohio Bobcats’ 74-year-old Frank Solich.

Even with a procedure reserved for the elderly, a hip replacement in April, Saban is still going strong entering his 25th season as a head coach. Ironically, Saban’s recovery time has made him want to coach even longer.

Depending on how much longer Saban coaches, he could pass Bear Bryant’s school-record 232 wins.

Entering 2019, Saban has 146 career victories. Even if he doesn’t pass Bryant in wins, Saban’s six SEC championships and five national championships — and counting — have already cemented his legacy as one of the greats in Tuscaloosa.

Besides, with another loaded Bama team this season, why would Saban want to retire? The Crimson Tide have Heisman-favorite Tua Tagovailoa (+250 odds) and the second-best odds, +220, to win the National Championship, behind only the Clemson Tigers at +180.