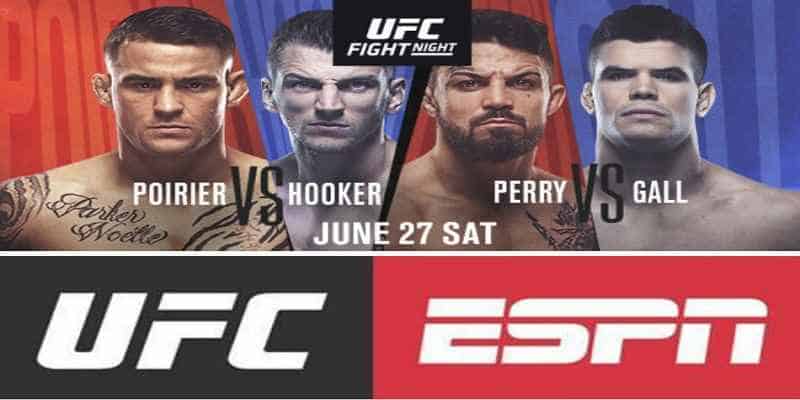 The Ultimate Fighting Championship is bringing the best mixed-martial-arts action to ESPN television as well as the ESPN+ app on Saturday night. Fight fans that are interested in betting on UFC are also in luck, as top-rated sportsbooks have produced odds for the entire card.

The featured main event bout pits two top-rated lightweight contenders against each other, “the Diamond” Dustin Poirier vs. “the Hangman” Dan Hooker. The odds suggest that Poirier and his 25-6 record will exit the fight as the victor.

UFC Fight Night odds have been provided by Bovada Sportsbook.

Dan Hooker is a heavy underdog for the fight, but the tale of the tape reveals several significant advantages that are sure to offer Poirier a lot of resistance.

Tale Of The Tape

“The Diamond” Dustin Poirier Vs. “The Hangman” Dan Hooker

Although Hooker is ten pounds lighter than Poirier, he has a three-inch advantage in height and reach, and can stand back and throw bombs if he so desires.

He also has a 2-inch advantage in leg reach and can keep Poirier at bay with a heavy dose of front kicks. The major difference in their game is the number of strikes thrown and landed, as well as how many are absorbed.

Poirier is also more efficient at grappling and takedowns, averaging nearly 2 takedowns per 15 minutes, as opposed to less than half a takedown over that same period of time for Hooker.

However, Hooker is much less susceptible to a takedown and is a master at defending against grappling tactics.

“Platinum” Mike Perry vs. Mickey Gall is another highly anticipated bout that features two talented welterweight competitors against each other.

Mickey Gall made a name for himself by easily embarrassing C.M. Punk a few years ago via a first-round submission. If the name C.M. Punk sounds familiar, its because he is a former World Wrestling Entertainment (WWE) heavyweight champion that tried to convert to MMA without any martial arts background.

Perry is predicted to make easy work of Gall, but if bettors have a hunch that Mickey can make it happen Saturday evening, then a lucrative payout can be earned by wagering on him. A bet of $100 on Gall has the potential to provide a $260 income supplement.

Be sure to check out UFC Vegas 4 on ESPN and ESPN+ beginning at 8 PM tomorrow night for a full card of exciting MMA action, and don’t forget to visit one of our recommend wagering sites to place a legal sports bet prior to the first fight.