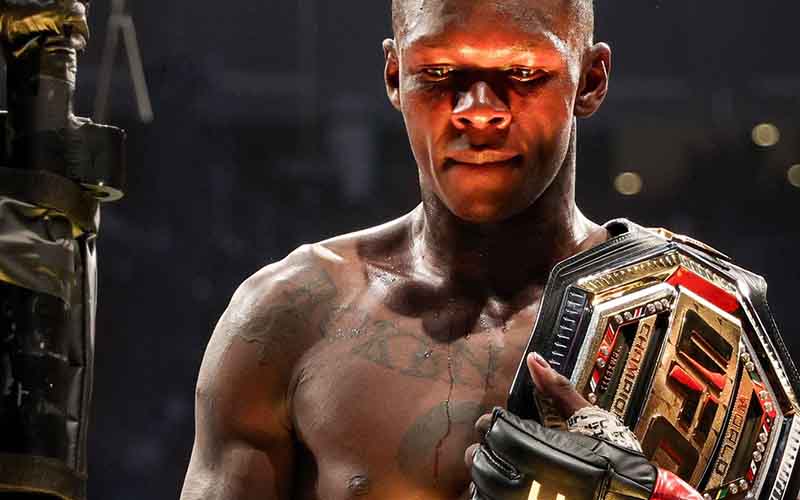 The UFC Middleweight Championship is on the line this Saturday night when Israel Adesanya puts his title up against journeyman Jared Cannonier at the Ultimate Fighting Championship’s 276th pay-per-view event.

Adesanya should be considered one of the best MMA fighters on the planet. His only loss came when he debuted as a Light Heavyweight at UFC 259, losing a unanimous decision to then-champion Jan Błachowicz.

Online UFC betting sites have produced match lines for Saturday night’s entire card, and the odds suggest that Adesanya should have no problem retaining his strap.

We’ve provided odds from three of our top online sportsbooks so that readers can see firsthand the benefits of line shopping for the best payouts.

If you think that Israel Adesanya will win just like the MMA betting odds suggest, then you should lay your action at Bovada.LV because the -450 moneyline they’ve offered is the best on the boards. A wager of $4.50 is required to net $1 on an Adesanya win at UFC 276, where the same result requires bets as high as $5 at other books.

For UFC gamblers that believe Jared Cannonier will score an upset win over Adesanya at UFC 276, then your MMA bets should be made at BetOnline.AG. Cannonier’s odds of winning at BetOnline Sportsbook are set at +376 which is 21 cents on the dollar better than the UFC gambling site that has him ranked the closest.

Before making your final UFC betting decision, have a look at the following comparison between Israel Adesanya and Jared Cannonier.

The only advantage that Cannonier possesses over Adesanya is weight. Jared is stronger and stockier, but that won’t do him much good unless he can get in close which is not an easy task against Adesanya’s long arms and striking range.

The one aspect of Cannonier that could open the door for an upset is his size similarities to Jan Błachowicz. Cannonier and Blachowicz are both stocky at around 205 pounds, but Jan is 6’2″ and much more capable of dealing with Adesanya’s reach and striking advantage.

Also on the card is a UFC Featherweight Championship bout between the title-holder Alexander Volkanovski and top contender Max Holloway.

The odds posted at the sites we include in our top online sportsbook reviews all seem to suggest that Volkanovski will retain his title this Saturday, but once again, there are some variances in the lines to exploit by shopping around.

Bettors can also indulge in live UFC odds while each fight is ongoing, but MMA fans know that bouts can end at any second so don’t wait too long to place your wagers. The live MMA odds can be removed at any time the book chooses so hunt around at another site we recommend if they disspear.