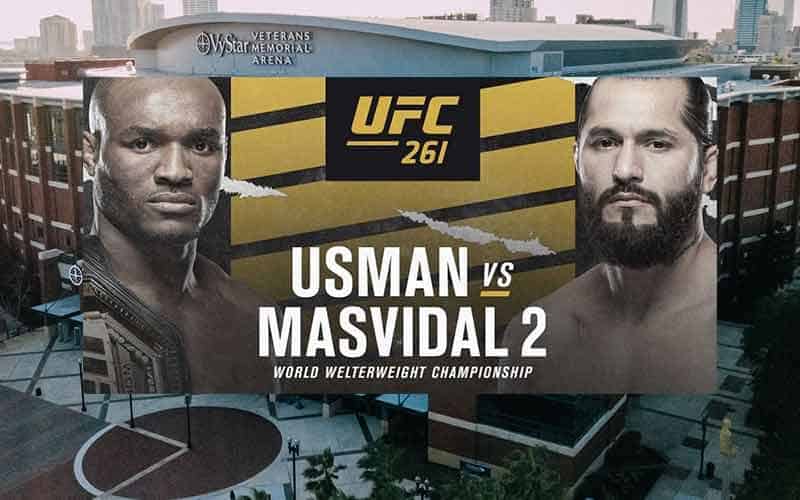 The “Nigerian Nightmare” Kamaru Usman will step into the Octagon this Saturday night at UFC 261 to defend his UFC Welterweight Title against “Gamebred” Jorge Masvidal.

In UFC 251, Usman was awarded a unanimous decision over Masvidal in their first clash. Now, Masvidal is out to prove that he is not over the hill and that he still belongs at the top of the card.

UFC 261’s main card is scheduled to begin at VyStar Veterans Memorial Arena in Jacksonville, Florida is this Saturday evening at 10 PM, but tickets appear to be limited to either premium Octagon-side seats or the secondary sales market.

The early odds posted at online UFC sportsbooks favor Usman to retain his title with a -400 money line, which equates to a 4 to 1 probability of winning.

However, if Masvidal can prove that he is indeed “Gamebred” and secure the UFC Welterweight Championship, his +300 odds of winning can earn three times the amount that is wagered on him.

Money line odds on UFC fights are for bettors who simply want to place a wager on which fighter will win the bout, but that action may not be intriguing enough for some combat sports fans.

The following UFC 261 prop bet for Usman vs. Masvidal provides additional avenues for betting on their championship matchup, allows gamblers to select the method of victory, and there are several profitable options that are within reason.

Usman vs. Masvidal: Method of Victory

We already know that Usman is an overwhelming favorite at online sportsbook sites that are promoting UFC 261 betting lines, but those odds do not indicate how the “Nigerian Nightmare” will do so.

Neither fighter is known for their submission prowess, and both combatants have won less than 6% of their MMA fights by using those techniques. Because the probability of Usman even employing a submission tactic are so low, oddsmakers are willing to risk loads of their own money against its potential.

Another prop bet features a favorable probability for a victory by judges’ decision for Usman.

Will the Usman vs. Masvidal fight go the distance?

Do not miss any of the action this Saturday night by watching the UFC 261 early prelims on UFC Fight Pass beginning at 5:45 PM, the official Prelims at 8:00 PM on ESPN or ESPN+, or order the pay-per-view at 10:00 PM on ESPN+.

And of course, if you miss out on taking part in the action for UFC 261, there’ll be plenty of odds at UFC Fight Night betting sites for their event on May 1st the following weekend.