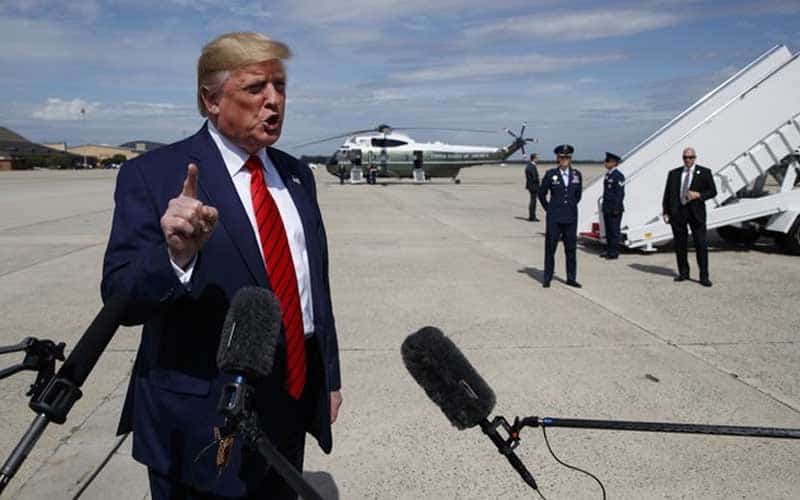 Will Donald Trump be impeached?

This week has been a whirlwind for American politics. From the whistleblower’s complaint to an official impeachment inquiry into President Trump, followed by transcripts and testimonies, the future of the United States is in limbo.

While everything is playing out, MyBookie is accepting prop bets on the future of Trump’s Presidency. Oddsmakers are taking action on Trump’s impeachment odds, reelection chances, or if the President will simply resign before the end of his first term.

Before diving into the Trump impeachment odds for the political prop bets—to get a better understanding of what’s happening at the moment—a timeline for the Trump whistleblower complaint is provided below:

The whistleblower’s complaint became publicly available today and claims that the White House tried to “lock down” the information in an attempt to cover up the incident. After reading the complaint document, Pelosi agreed with the coverup notion.

Trump has denied all allegations of wrongdoing and has taken to Twitter to tweet out both his distaste for how the Democrats are treating him and what he thinks about the whistleblower bombshell.

There has been no President in the history of our Country who has been treated so badly as I have. The Democrats are frozen with hatred and fear. They get nothing done. This should never be allowed to happen to another President. Witch Hunt!

THE GREATEST SCAM IN THE HISTORY OF AMERICAN POLITICS!

Pelosi, who has launched an official impeachment inquiry and agrees with the whistleblower that there’s is a coverup afoot, will need to follow the process in place needed to remove a sitting president.

First, the House Judiciary Committee holds an investigation and recommends articles of impeachment to the House if the findings are sufficient.

The House then holds a vote on the articles. If a majority of the House vote to impeach, Trump will be impeached at that point.

If impeached, the articles move to the Senate where a trial is held with a vote to convict the President. If two-thirds vote to convict, Trump will be removed from office.

Of the two other presidents to reach this point, Bill Clinton and Andrew Johnson, both were acquitted and completed their terms. Richard Nixon also faced impeachment and removal from office following the Watergate scandal but resigned on August 9, 1974, before there was a vote by the House.

The most pertinent prop bet offered on MyBookie is whether or not Trump will be impeached before the 2020 election, oddsmakers overwhelmingly believe Trump won’t be impeached with “No” receiving -500 odds.

Will Trump be impeached before the 2020 election?

There is a chance, however, that Trump could do what Richard Nixon did. Seeing that his impeachment was inevitable following the Watergate Scandal, Nixon resigned as president before being impeached.

Will Trump resign before the end of his first term?

Will Trump run for reelection in 2020?

The -300 odds amongst all candidates mirrors the chances MyBookie gives Trump on his second term chances. It should be noted that the chances here are much closer than the other bets.

Will Trump be elected to a second term as President?

To lighten the mood somewhat—or to possibly depict a darker image of worldwide politics—MyBookie is also accepting action on which world leader will leave office first between Trump and the United Kingdom Prime Minister Boris Johnson, who’s currently under fire from Parliament over Brexit negotiations.

Johnson is favored to be gone before Trump at -350 odds.

Who will be out of office first?