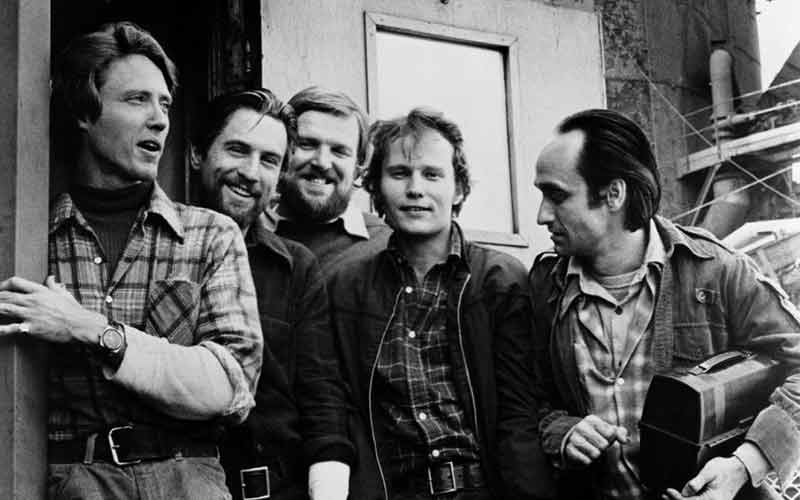 In the spirit of betting on the 2021 Academy Awards, we’ve decided to begin a series of articles that exposes our readers to some of the greatest movies of all time that include aspects of sportsbooks and their operations in the plot.

Sure, when browsing the web for lists that recount the top sports betting films of all time, you’ll find mentions of Martin Scorsese’s Casino, Eight Men Out, and The Color Of Money (also directed by Scorsese) on almost every list.

Our purpose is to “shine a light” (also directed by Scorsese) on movies that aren’t commonly thought of as existing within the realm of sports betting despite the fact that nearly all of the stakes contained inside of the plot are based directly on a wager or an entertainment prop bet.

The first film we will tackle in this series of articles is the 1979 Academy Award Winner for Best Picture, Best Director (Michael Cimino), Best Supporting Actor (Christopher Walken), Best Editing, and Best Sound – The Deer Hunter.

The Deer Hunter is the story of three high school friends from an industrial mill town in western Pennsylvania who are drafted into military service and shipped off to the Vietnam War.

While there, the three of them are captured, placed into a prison camp, and subjected to torturous games of Russian Roulette by their guards. Robert DeNiro’s character of Mike has to make some hard choices to ensure the group’s survival, and although successful, it sends Christopher Walken’s character of Nick into a downward spiral inside of the Vietnamese underworld.

How Is Sports Betting Involved In The Deer Hunter?

Following the two main characters’ ordeal, Nick loses all touch with reality and seems to develop a death wish as he becomes obsessed with participating in games of Russian Roulette surrounded by feverish betting activity.

This has caused Nick to become a bit of a celebrity in the regional Vietnamese betting markets, and Mike represents the only chance to rescue him and bring him back home to the alternate misery of western PA.

How The Betting Odds Work?

The game of Russian Roulette involves two men passing a pistol back and forth, with each one taking turns pulling the trigger while the snout is placed against the side of their heads.

Typically, the gun is a revolver that is loaded with a single bullet, but in some cases, more than one bullet can be used.

When the two men enter the field of play, which in the film is represented by sitting at a table amid a crowd inside of some sort of gambling shed, the odds are announced for each person, and the gun is presented and loaded with a single bullet.

After that, betting action is followed by multiple gray-suited bookies walking through the crowd and taking wagers for both sides.

Once the main official makes the call, all bets are off and the competitors must begin their deadly game of back and forth until one of them draws the unlucky chamber.

These mobile bookies are known as “Kristos” in Southeast Asia, and although these games of Russian Roulette are 100% fiction, their actions are very similar to when betting on sabong, or cockfighting.

Kristo is a reference to Jesus Christ and how his outstretched hands resemble the reach of these floating bookies, and all wagers are committed to memory without the use of any kind of bet slip.

While this may seem like an unreliable method of depositing and withdrawing with a sportsbook, these handlers are incredibly experienced. Gambling is treated with a life and death level of seriousness in Southeast Asia, and these bookies are expected to deliver 100% accurate results based on memory.

The film received harsh criticism for its portrayal of Russian Roulette betting being so prominent in Vietnamese society despite the lack of any evidence of its occurrence, and understandably so. All the same, the film did win the Oscar for Best Picture of 1978 and is considered by many to be one of the best movies ever made regarding the Vietnam War.