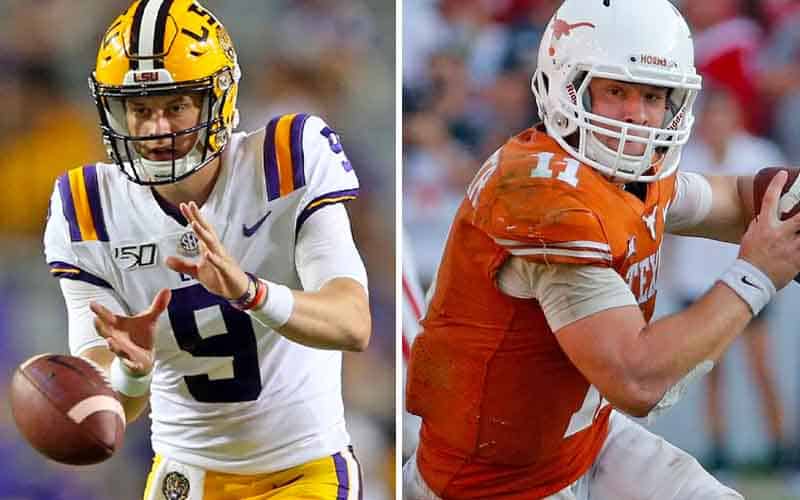 The first top ten matchup of the 2019 college football season could have championship implications, even in Week 2. For two teams that haven’t played each other in the regular season since 1954, there could be a lot on the line Saturday.

The sixth-ranked LSU Tigers will travel 400 miles west to take on the #9 Texas Longhorns in Austin tomorrow where they are favored over the hometown team. The Tigers currently sit as 7 point favorites over the Longhorns with the game’s total over/under at 57 points.

The LSU offense could be a problem for Texas, assuming the Tigers can post the same numbers they did in 2018. Last season, LSU average 32.4 points per game. After returning eight offensive starters in 2019, LSU dropped 55 points on Georgia Southern last weekend.

Despite this, the Longhorns could be in a good position facing LSU’s offense. Tigers QB Joe Burrow completed less than 55% of his passes against rankled teams in 2018, going 1-2 in such games.

Nevertheless, LSU head coach Ed Orgeron has total faith in Burrows: “We have complete confidence in the things he can do.”

After last week’s performance, there’s no wonder Orgeron has faith in his quarterback. Burrow threw for 278 yards and a school-record 5 touchdown passes against Georgia Southern.

With any premier contest, off-field jawing is inevitable leading up to the LSU-Texas game. Like the Texas A&M-Clemson showdown tomorrow, there’s been some light trash-talk between Texas and LSU, too.

Prior to their game against Louisiana Tech last week, the Texas secondary players wore shirts that said: “There’s only one DBU.”

For years, LSU has called itself DBU due to its impressive record of great defensive backs. Texas plans to wear these shirts in the LSU pregame, but Texas DB Brandon Jones says it’s not a dig at LSU.

“It was not any shot at any other team out there,” Jones claimed, via Ross Dellenger’s Twitter post.

“It was not any shot at any other team out there.” pic.twitter.com/S3OjPT3OH3

Orgeron had little to say about the shirts: “All I know is we’re LSU. That’s all I know.”