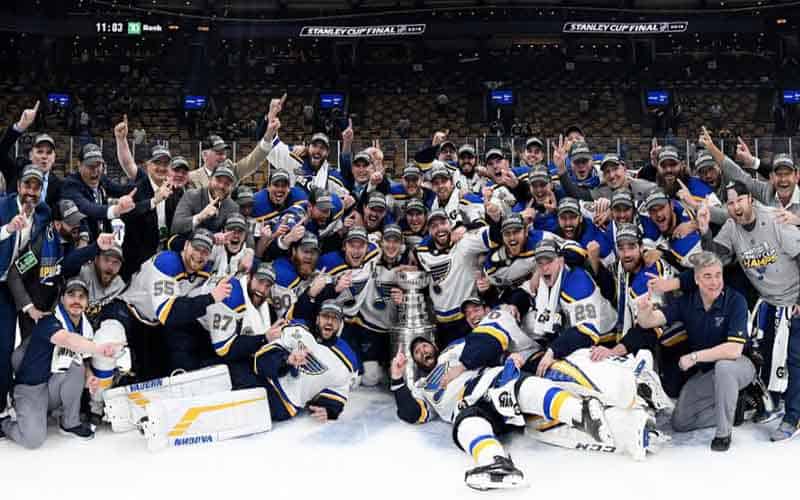 After a 52-year wait, St. Louis can finally stop singing the blues.

The St. Louis Blues started the year at the bottom of the NHL standings and went on to pull off one of the most improbable turnarounds in sports history by beating the Boston Bruins 4-1 on the road in Game 7 and winning the first Stanley Cup in franchise history.

Blues center Ryan O’Reilly scored a goal for the fourth straight game, becoming the first player since Wayne Gretzky to accomplish the feat in the finals, and was awarded the Conn Smythe Trophy as the 2019 Stanley Cup playoffs MVP.

Did you miss the Blues win Game 7 against the Bruins? Here are the highlights of the Blues winning their first-ever Stanley Cup.

And few — including the oddsmakers — saw the Blues winning it all, and according to ESPN, they “became the first team in the expansion era to win the championship after owning the NHL’s worst record at any point following their 30th game.”

At this time, sportsbooks had the team listed at 250-1 (or +25000) to win the Stanley Cup. After converting for implied probability, the Blues had a 0.4% chance of winning it all.

And one St. Louis bettor never stop believing in the Blues.

When the Blues were at the bottom of the standings in January, Scott Berry happened to be in Las Vegas for a business conference but didn’t get the chance to play at the casinos like he routinely does when visiting the Strip.

Instead, the opportunity of a lifetime presented itself.

Since he’d already taken out $500 as his gambling allowance money, but wouldn’t get a chance to spend it, he chose to visit Caesars Sportsbook and put $100 on the Cardinals winning the World Series, and more importantly, put $400 on the Blues to win the Stanley Cup at 250-1.

Despite the opportunity to hedge his bet and guarantee a sizeable profit on multiple occasions regardless of who won in the finals, Berry’s faith was rewarded with a $100,000 payout when the Blues lifted Lord Stanley’s Cup last night.

Congrats to the Blues and Berry on the big wins last night, and now, looking ahead to the 2019-2020 season, we can see that the oddsmakers aren’t listing them as favorites, but the Blues will be anything but a longshot next season.

The 2020 Stanley Cup odds were released immediately following the end of Game 7, and the Tampa Bay Lighting open as favorites at +600.

The Lightning won the Presidents’ Trophy for having the best overall record during the 2018-19 regular season and tied the all-time record for most wins (62) in a single season.

Below you can find the complete list of opening betting odds for the 2020 Stanley Cup.