Take The Money And Run: Why The Blues Bettor Should Hedge His $100K Ticket 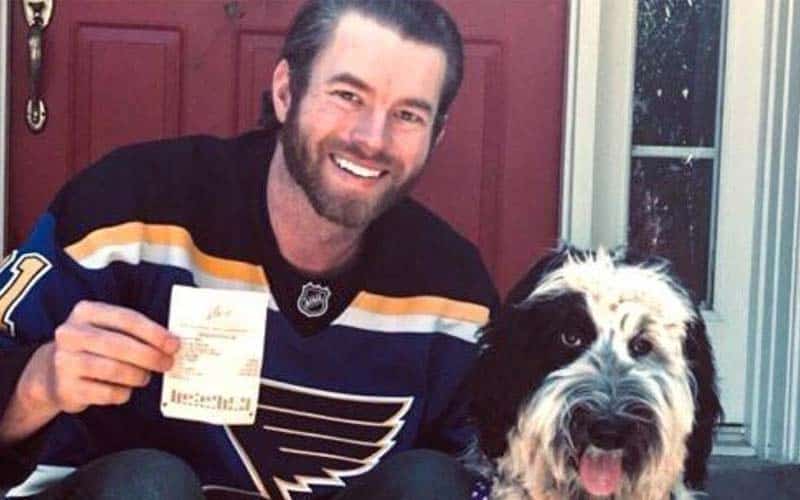 The Steve Miller Band recorded and released the song “Take the Money and Run” in 1976, which tells the story of two young lovers who rob a bank, make out like bandits, and get away scot-free.

St. Louis Blues fan and latest viral bettor Scott Berry could win $100,000 — from a $400 wager he placed in Las Vegas at 250-1 odds in January — if his favorite NHL team wins Game 7 of the Stanley Cup Final against the Boston Bruins on Wednesday.

He could also win nothing if his hometown team loses.

There is a third option: Berry could hedge the bet before the puck drops tomorrow night and receive guaranteed money from the sportsbook.

Unfortunately, he must have never listened to Steve Miller’s idiomatic rock classic, or maybe he doesn’t know that “accepting what is offered to you before the offer is gone” is the common interpretation.

It could just be because he’s bigger fan of the blues.

But as ludicrous as that sounds, is it any less reasonable to let fandom — which would be “pride” if sports betting had seven deadly sins — be the sole reason not to hedge a bet and walk away with a risk-free profit regardless of which team lifts Lord Stanley’s Cup?

Greed would be what’s expected in this scenario, and even understandable to some extent, but that’s not the case with the St. Louis native.

Before Game 6, the Blues were up 3-2 in the series, and the Bruins were listed with underdog odds to win the Stanley Cup for the first time all series.

Online sportsbooks listed the Bruins odds in the +200 to +300 range (2-1 to 3-1), which means on the low end and when converted to an implied probability, oddsmakers gave the team a 25% chance to win two straight games against the Blues.

And Berry could have returned to the same Caesars sportsbook where he initially made his futures bet and gotten similar odds. Caesars had the Bruins series price at +250 before Game 6 began.

It’s unwise to try and make a living — or any profit — from trying to consistently pick who will finish in 2nd place.

Those teams are destined to be forever trapped in woulda, coulda, shoulda purgatory by the runner-up reaper for being slightly less mentality tough, prepared, talented and confident compared to the champion.

And confidence is the key to sports betting. Like the champion, your bet needs confidence behind it to succeed.

But there’s a big difference between placing bets based on confidence and pride. The former is to be sure of your pick by using objective reasoning, and the latter is to excessively overvaluing your pick due to subjective bias.

And this is where fandom rears its ugly head.

Because even after learning of the possibility of earning a lucrative risk-free payout, Berry was asked by ESPN before Game 6 if he would hedge his bet.

Berry answered with a resounding “no” and effectively poured gas on the fire that is the “to hedge or not to hedge” debate being held between sports fans and sports bettors on social media.

“The fate of the Blues will be the fate of me,” Berry told ESPN. “You never say never [for hedging], but I woke up Friday morning with the feeling the Blues are going to win this in six. That’s how I feel.”

The Bruins would rain on Berry’s and Blues’ parade in Game 6, winning 5-1 in St. Louis, and sending the series back to Boston for a winner-take-all Game 7.

“I feel like I’m in this with the team, and I don’t want to lay any of it off,” Berry said when asked why he remains committed to the original wager. “I put the bet down in January for $400 to win $100,000. That was the bet. … I’m very superstitious and don’t want to ruin any juju.”

This is where the sports fan and the sports bettor routinely clash, and the civil war betting the purist and the realist will continue to add more and more infantry to both sides as legal sports betting sweeps across the country following the Supreme Court decision last year.

Everyone from family, friends, online followers and even the CEO of the company he works for has urged him either to hedge the bet or to remain committed to the original bet and be a believer in the Blues.

After all, if he didn’t believe in his hometown team, then he likely wouldn’t have placed a bet in the first place.

“I’ve gotten calls from friends who live in San Diego, and they’re saying I’m the talk of the water cooler,” Berry said. “Friends I haven’t talked to in years giving me advice on hedging.”

It appears Berry doesn’t care about fame or fortune, and just wants the Blues to hoist the Stanley Cup for the first time in history. Even the recent news of a March Madness bettor not hedging a $300K ticket and losing everything has not affected his “all or nothing” decision.

“If I end up being the Texas Tech bettor 2.0, then so be it. I’ll live with it,” Berry said. “This has been an incredible ride, to say the least. In my opinion, the $400 I spent was well worth this experience. I feel like I’ve already hedged in a sense. The money is a great bonus if the Blues win the Cup … but in my opinion, I’ve already won.”

Except what has Berry won?

Nothing. Except for respect from Blues fans who have nothing to lose because they didn’t make the same bet that Berry did back in January when the team was tied for the fewest points in the NHL’s overall standings.

After all, can Berry be labeled as a traitor when he believed in the team when no one else did?

Believing a team can win it all is easy when there’s only one game left, but much harder when there’s over half a season remaining and the team has a losing record.

According to Bovada, the Bruins are favored heading into Game 7 with -165 odds while the Blues are the underdogs at +145.

But Berry remains committed to his futures bet heading into tomorrow’s matchup, and when the puck drops at 8:00 p.m. ET on NBC in Boston’s TD Garden, we’ll know before the night is over whether his team loyalty will be rewarded.

“I might be the captain of the Titanic that goes down,” Berry said. “But I’ll still be a hero.”

I’ll be rooting for the Blues to hoist the Stanley Cup, Berry to win $100,000 from his $400 bet, and to prove me and other bettors wrong by sticking with his gut, instead of using his brain to take the guaranteed return on investment.

Hopefully, this isn’t another sports betting story where fandom causes the bettor to lose because if it happens this time, you can catch Berry in St. Louis singing the Blues.