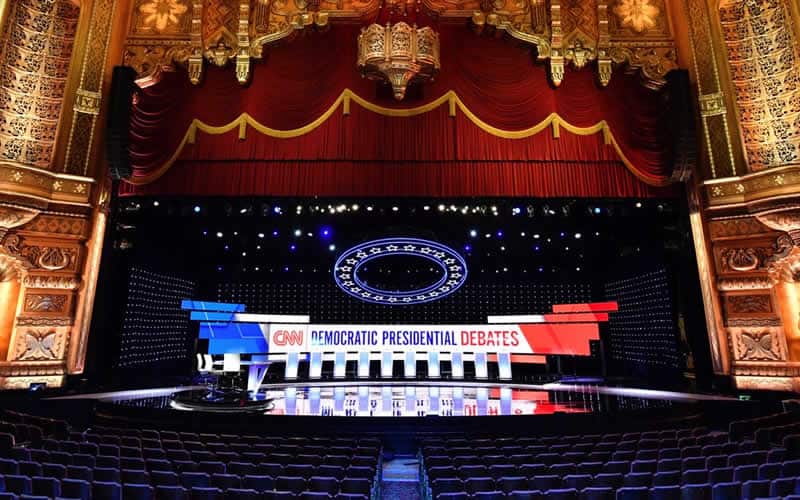 Get your prop-corn ready because betting odds are now available for the highly anticipated Democratic Debate 2: Electric Boogaloo.

The oddsmakers at BetOnline released a smorgasbord of political prop bets ahead of the second Democratic presidential primary debate on Tuesday and Wednesday, and we’re here to breakdown everything you can bet on during both nights.

We’ve separated the debate odds into nine categories and clicking on any of the links below will take you to directly to the prop bets listed in that category on this page. All of the debate prop bets and political betting odds can be found at BetOnline.

Where: Fox Theatre in Detroit, Michigan

Who: Top 20 qualifying presidential candidates for the Democratic Party

Lineups: From left to right

*According to the New York Times. Both nights.

Which candidate will receive the most speaking time on Tuesday?

*According to the New York Times.

Which candidate will receive the most speaking time on Wednesday?

*According to the New York Times.

Buttigieg has the best odds to receive the most speaking time on Tuesday, which makes sense because he received the most talking time in June amongst Tuesday’s field. For Wednesday, Harris is expected to get the most time. In June, she was only outspoken by Biden, who has the second-best odds for Wednesday.

How many non-facts will be said?

*According to the Washington Post fact-checker blog. Both nights.

The Washington Post Fact Checker, which has dispelled over 10,000 non-facts from Trump alone, will be the source for misleading or incorrect information for the July debates.

How many times will the candidates say “Trump”?

During the first debate, the candidates mentioned Trump 63 times over the two nights in Miami.

How many times will Sanders say “Trump”?

Of the 63 Trump mentions in June, Sanders accounted for six.

How many times will Biden say “Trump”?

Biden racked up nine of his own Trump mentions in the first debate.

Will “go home” be said by any candidate?

Will “The Squad” be mentioned by any candidate?

After Trump’s controversial Twitter thread targeting “The Squad,” his “go back” phrase could be a talking point for the Democrats during the debate. However, the phrase itself is not expected to be said nor is a candidate expected to mention “The Squad” at all.

Will “impeach” be said by any candidate?

Will Mueller be mentioned by any candidate?

Another talking point centered around Trump could be the possibility of his impeachment. Candidates are expected to mention Mueller, who gave his testimony last week surrounding Trump collusion allegations, at -300 odds. Saying “impeach” is also expected by the candidates at -250 odds.

How many times will Trump tweet during the Tuesday debate?

*Only tweets from @realDonaldTrump. Retweets do not count.

How many times will Trump tweet during the Wednesday debate?

*Only tweets from @realDonaldTrump. Retweets do not count.

Not counting retweets, Trump tweeted 33 times from June 26-27, although not all the tweets were directly related to the debate or within the debates’ televised time slots.

*During Tuesday debate. According to AdWeek.com.

*During Wednesday debate. According to AdWeek.com.

*During Wednesday debate. According to AdWeek.com.

According to AdWeek, the most tweeted about candidates during the first debate were, in order of popularity, Warren, Booker, Castro, Sanders, Biden, and O’Rourke.

How many times will Biden/Harris be shown?

*Must be shown on split-screen.

The June debate’s most talked-about moment was when Harris called out Biden on his support of former US Senators that opposed desegregation of school busing. Now that the two are paired up again during the second debate, sparks could fly.

Will Biden touch Harris, Gillibrand, or Gabbard on stage?

Biden’s behavior towards woman has also been under scrutiny. Eight women accused Biden of inappropriate touching or invasion of personal space. With that over his head, it’s not likely that he’ll touch any of the women on stage during the debate.

Will any candidate say “my time is up”?

Biden also gave audiences an interesting bit of speech when he cut himself off mid-answer to say that his allotted time was up. Hopefully, for Biden, that was not an allusion to his presidential chances. No candidate is expected to repeat the phrase this time.

Will Beto O’Rourke speak in Spanish?

Will a candidate speak in a language other than English or Spanish?

Using Spanish was en vogue during the Miami debates. O’Rourke began the multilingual exchange for the Democrats, and he’s expected to speak Spanish again in the second debate. Buttigieg, who used a little bit of Spanish in June, also has knowledge of multiple other languages, although it’s unclear if he, or any of the other candidates, will use a language other than Spanish or English during these debates.

How many times will Kirsten Gillibrand blink?

*First time she is solo on camera.

During the June debate, Gillibrand blinked 84 times during her first solo appearance. The odds say it will happen again at -125 on the over.

This prop bet is related to Yang’s “Freedom Dividend.” According to Yang’s campaign site, the Freedom Dividend is a form of universal basic income that promises $1,000 per month to every American adult.

How many times will the candidates say “Puerto Rico”?

Puerto Rico was only mentioned once during the June debates, but a lot has happened since. Due to protests throughout the island, PR Gov. Ricardo A. Rosselló has stepped down from his post.

Will Alexandria Ocasio-Cortez be mentioned by any candidate?

*Alexandria Ocasio-Cortez or AOC. Both nights.

Will “bailout” be said by any candidate?

General Motors released fact sheets detailing their 2009 bailout in relation to their recent cutting of 15,000 jobs. With the debates happening in GM’s backyard, the term is getting favorable odds.

Will anyone endorse another candidate for President?

It’s pretty early for a candidate to endorse their competition and the odds of it not happening reflect that.

How many times will the moderators ask for a show-of-hands?

How many times will the moderators say “time is up”?

The candidates only get a certain amount of time to answer their questions, many times running over that allotted amount. But the amount moderators have to remind the candidates is the key point here with the over/under.

Will there be a unanimous show-of-hands on Tuesday?

Will there be a unanimous show-of-hands on Wednesday?

None of these are likely to happen, especially after CNN pledged not to ask questions that require a show-of-hands or one-word answers.

Will there be a microphone malfunction during the broadcast?

In June, there was a mic malfunction during the second hour resulting from the first hour’s moderators leaving their mics on. They quickly fixed the problem, and no more related incidents are expected in the second debate.

During the June debates, Buttigieg, Castro, Sanders, and Yang all said words that could be considered curse words by some, but no words spoken resulted in a bleep.

How many times will the candidates say “Motor City”?

Detroit’s nickname is not favored to be said often with under 1.5 times slightly favored.

Will Dearborn, Michigan be mentioned by any candidate?

Dearborn is a city in the Detroit metro that is home to the largest Muslim population in the United States. Given America’s relationship with Islam over the past couple of decades, the odds say the city will be mentioned by the candidates.

Will Ford be mentioned by any candidate?

Will Chevrolet be mentioned by any candidate?

Ford and Chevy are both manufactured in Detroit. With recent bailouts, job loss, and technology development between the two, odds favor a Ford mention but not one for Chevrolet.

How many times will the candidates say opioid?

The opioid crisis was not directly discussed during the first debate. Odds are even at 6.5 opioid mentions during the second debate.

Will the price of insulin be mentioned by any candidate?

On Sunday, Sanders took thirteen American diabetics across the Canadian border to Windsor so they could purchase insulin for $30 instead of paying $300 in America. Based on that action alone, the price of insulin could be mentioned, although the odds say otherwise.

Will Martin Shkreli be mentioned by any candidate?

“The most hated man in America” raised the price of Daraprim from $13.50 to $750 per pill in 2015. Odds do not favor him getting mentioned directly, even if health care prices are debated on.

Will Purdue Pharma be mentioned by any candidate?

During the first debate, both Booker and O’Rourke both said they believed Purdue Pharma should be held responsible for their role in the opioid epidemic. Chances that another Purder reference is made are favorable for the Detroit debate.

Will Johnson & Johnson be mentioned by any candidate?

The Federal Trade Commission issued civil subpoenas to J&J in June as part of an investigation into their contracts for the drug Remicade violating antitrust laws. The conglomerate is not projected to be mentioned.

The Democratic Party began 2019 as the favorite to win the presidency over the Republican Party, but those odds are now dead even. Kamala Harris, who started the year out as the Democratic favorite, reclaimed the top spot after a solid performance during the June debates.

Lastly, Donald Trump is currently predicted to win the 2020 Presidential Election at -110 odds, giving him approximately a 52.38% chance of winning re-election on November 3, 2020.

Which party will win the 2020 Presidential Election?