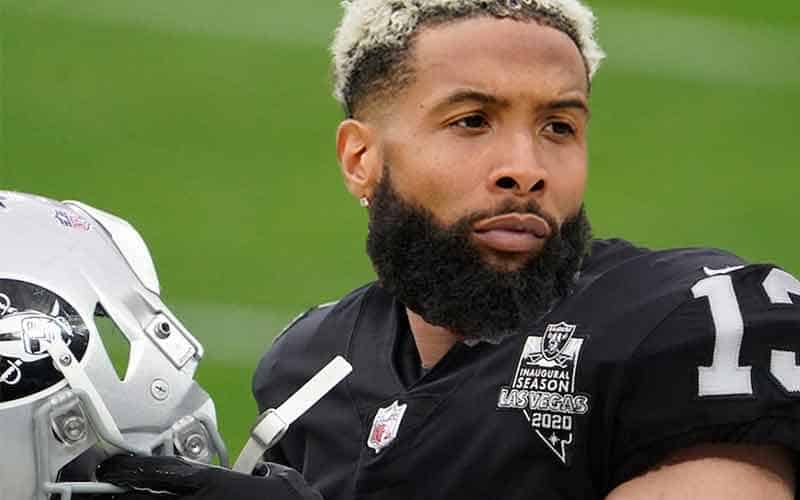 Now that Odell Beckham, Jr.’s release from the Cleveland Browns is imminent, NFL prop bets have debuted at online sportsbooks that are accepting action on which team he will end up with next.

While many NFL teams will be interested in his services, should they be? His performance over the last 2 and a half seasons wouldn’t secure a roster position for a mid-round rookie, but his first few years with the New York Giants are still fresh in the memories of many an NFL General Manager.

We’ve not included every team listed in the prop bets from Bovada Sportsbook, but we’ve listed the odds and some rationale for NFL franchises that are likely to pick him up for one reason or another.

The unfortunate release of Henry Ruggs, III last week has created a hole in the roster that Beckham could certainly fill. Perhaps a change of scenery will be productive for Beckham, but one cannot help but notice the similarities between the starting offenses of Cleveland and Las Vegas.

Both are loaded with young talent and are led by quarterbacks that came into the league with excess hype only to wallow slightly above mediocrity for most of their careers. If the money is right, Beckham will sign with Vegas, but it doesn’t represent his best opportunity for success.

NFL betting sites favor the Raiders over all other NFL franchises to sign Odell Beckham, Jr., and the odds are still high enough to double up when laying some action on him ending up with Las Vegas.

The Ravens do not feature any wide receivers on their roster that can perform like Beckham when he is at his best, but Baltimore has deliberately avoided the signing of ego-driven #1 WRs for much of their history. This move doesn’t make any sense at all and wouldn’t fit the profile of the team or the general management’s direction.

Michael Thomas has gotten off to arguably the greatest start to a career for a wide receiver in the history of the league. That said, he was just declared out for the year, and now the Saints have a roster spot to fill heading into the postseason stretch.

In order to become one of the NFC’s final 7 teams that will compete for a chance to reach Super Bowl 56, they’ll need to figure out who will be throwing the ball first, as starting QB Jameis Winston will now miss the remainder of the season with a torn ACL.

With so many questions surrounding their current starting quarterback, signing Odell Beckham, Jr. at this point seems like a reach for New Orleans.

Similar to the Ravens, the Buffalo Bills are not geared to rely completely on the passing game, and already possess a lot of talent at wide receiver. Again, if the price is right, the Bills, or any other team, would be out of their minds not to take a flyer, but he’ll likely be too rich for Buffalo’s blood in 2021-22.

Here’s where it gets interesting. The New England Patriots are still fighting to remain in the playoff hunt, and rookie QB Mac Jones appears to be settling in at the position. Odell Beckham, Jr. would bolster this WR corp more so than any other on this list, and Bill Belichick has a long history of getting solid work out of former malcontents.

The +450 NFL moneyline odds will pay bettors $4.50 for every $1 wagered, and we’ve got a hunch that Belichick and Robert Kraft are making plans now.

Although Odell wouldn’t be the best fit from an HR perspective in the 49ers locker room, San Francisco could use another receiver to ease the burden of the starting offense. Deebo Samuel is on a historic statistical pace in 2021-22 and appears to finally have established himself as the #1, but Brandon Ayuk has disappeared in year two following a promising rookie season.

When a top talent like Beckham hits the waiver wire in the NFL, fantasy destinations often come to mind that place them where they could do the most damage. Following last season’s Super Bowl loss and their sluggish start this year, KC could be ready to hit the panic button and give Beckham a try, and wagers on that outcome will payout handsomely.