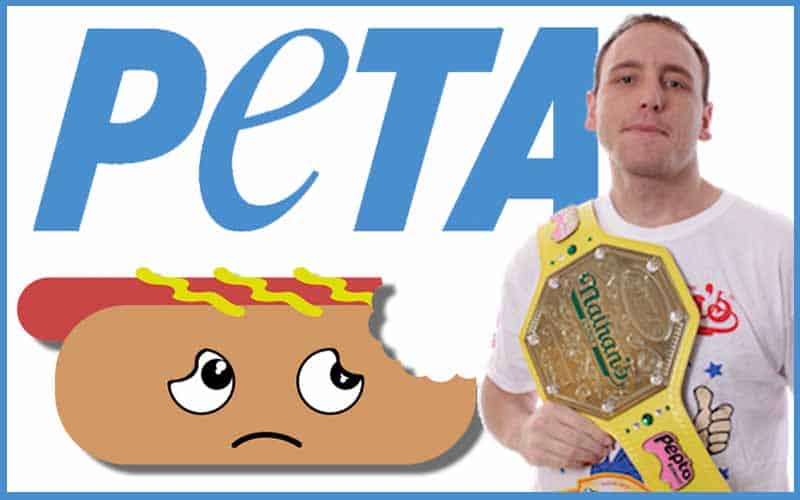 Prop bets are up for the 2019 Nathan’s Hot Dog Eating Contest and they project a fourth consecutive win for Joey Chestnut. What’s not projected, however, is another animal rights protest during the action.

In 2016, protesters interrupted the hot dog eating contest by dousing a few competitors with fake blood.

While PETA officially denied involvement with that particular protest, bettors can still wager if the organization will interrupt the contest in 2019. Bovada says no at -1600.

As the only vegan on the staff, our editor wanted my opinion on the Independence Day tradition of Nathan’s Hot Dog Eating Contest.

Simple: It’s bad and I hate it.

That is why I applaud the emerging sports betting powerhouse New Jersey for outlawing bets on the contest this year, although I’m sure our reasons differ for wanting less exposure for the contest.

Contest spectators, backyard barbecue visitors, and baseball fans might be wondering what’s in a hot dog this Fourth of July. According to Discovery Channel’s How It’s Made, traditional hot dogs consist of leftover pieces of pork, beef, and chicken.

Despite being an American favorite, the World Health Organization classifies hot dogs as a carcinogen in the same category as cigarettes and asbestos.

Per the WHO website: “this classification is based on sufficient evidence from epidemiological studies that eating processed meat causes colorectal cancer.”

This can’t be good for the projected winner, Chestnut (-750), and his long-term health.

Since losing in 2015, Chestnut has broken the record for most hot dogs eaten per contest every year since 2016. This culminated in his 2018 total of 74 hot dogs.

The over/under projected for the men’s contest this year is 73.5 and 40.5 for women’s competition.

It’s a good thing I won’t be in Coney Island tomorrow because Snoop Dogg, and I share similar mindsets when it comes to hot dogs: “Every time I see a motherf*cker at a barbecue with a plate with a hot dog on it, I’m knocking that sh*t out his hands.” [https://youtu.be/1Fl2sMV7Hcc]

For now, here are the betting odds and prop bets available for this year’s hot dog eating competition.

Will a contestant be interrupted by PETA during the contest?

Will there be a recount?

Will there be an eat-off?

Total hot dogs eaten by Chestnut at the five-minute mark?

Total hot dogs eaten by Chestnut at the one-minute mark?