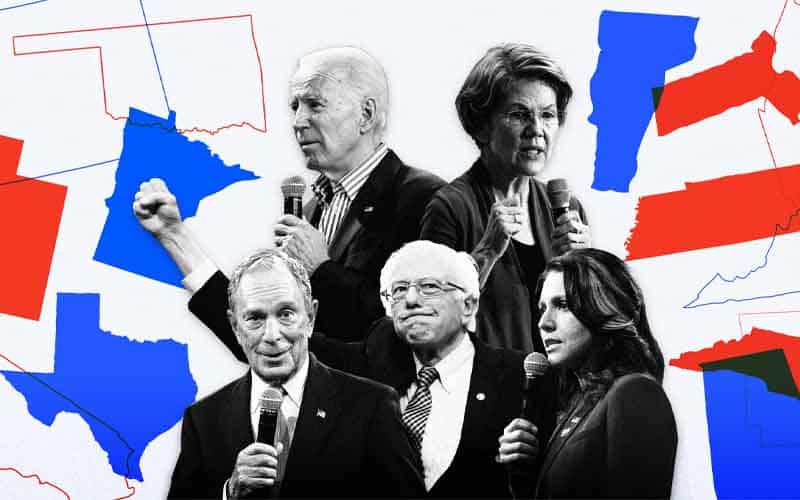 It’s finally Super Tuesday, which means one of the most popular times of year to bet on politics legally is finally here.

A total of 1,357 delegates can be won on March 3, 2020, from the 16 Democratic presidential primary elections—14 states, American Samoa caucuses, Democrats Abroad primary.

Although the 2020 Super Tuesday odds favor Bernie Sanders to win more states than Joe Biden, no state has gone “all-in” on allowing the public to place real money wagers on politics.

The state-licensed and regulated sportsbooks are not allowed to accept bets on politics or any election, including the highly anticipated 2020 presidential election, which will feature President Donald Trump going head-to-head with the eventual Democratic nominee.

Without Super Tuesday odds or any way to wager on politics, the top online sportsbooks legally operating outside the United States is your safest bet.

Since the US Supreme Court repealed PASPA on May 14, 2018, the list of states with legal sports betting has continued to grow.

Today, 14 states are offering either brick-and-mortar sportsbooks via casinos or provide Internet wagering services via betting sites and mobile apps.

By the end of 2020, the number of states offering a place—either physically, online, or both—to bet on sports legally is expected to double.

At the very least, the projections show a majority of jurisdictions will have legal sports betting available before the calendar turns to 2021.

According to John Murray, an oddsmaker at the Superbook in Las Vegas, the US sportsbooks are missing out on a massive opportunity by not offering betting odds on Super Tuesday, the 2020 election, or anything related to politics.

Murray said “the handle would be astronomical” when asked how much sportsbooks could make if they accepted bets on politics, according to an interview with the Action Network.

“It’s just something that everyone has an opinion on,” Murray said. “Everyone thinks they know about it more than the next guy. It’s such a polarizing topic, even more than sports.”

Sarbjit Bakhshi, the head of Smarkets, a London-based betting market, also told Action that the 2019 political betting handle was a record for the company.

When asked about this year’s handle, Bakhshi said Smarkets has already accepted about $4 million on the 2020 US presidential race.

Bakhshi said, “with recent advancements in technology, more and more people are betting on politics” and added that sportsbooks operating in the United States are leaving “billions of dollars” on the table.

But don’t bet on state laws permitting its licensed and regulated betting operations to accept any wagers anytime soon.

Why? Because every sports betting law sculpted from ice and glacially passed by the state legislatures, signed or not by the governors, has only allowed “sports” specifically, and nothing else.

Legal esports betting is spotty at the state level, but no state can offer odds on politics.

The irony is you, a working American with money, can bet any amount on any candidate to win if the return on investment goes to the politician specifically—whether donations through election fundraising or gifts via lobbying.

But when the “bet” could directly benefit you, the working American with money, the politicians—establishment, deep state, elites, or whatever you want to call them—have long stood above us and vehemently against that idea.