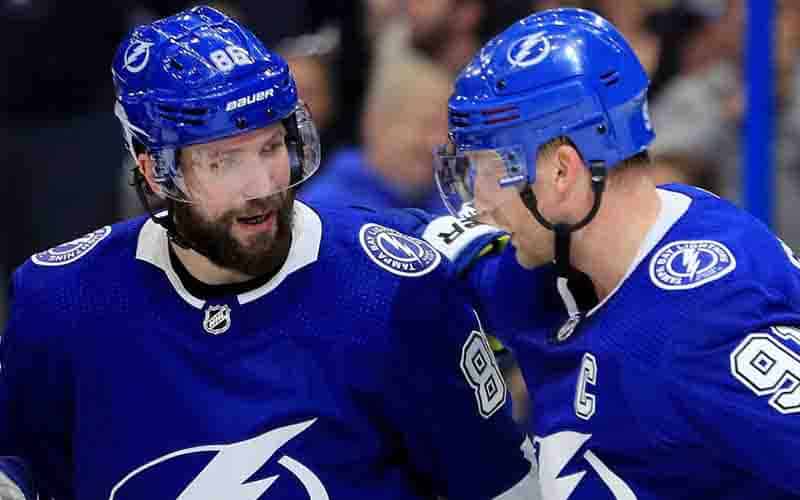 The Tampa Bay Lightning will attempt a three-peat as Stanley Cup Champions in 2022, but the field of NHL Playoff contenders laid out in front of them creates an improbable path to the finals.

Tampa has already fallen behind a game in their first-round series against the Toronto Maple Leafs, and the game 2 line for NHL Playoff betting suggests the Lightning will fall into a 0-2 hole tomorrow night.

Have a look at the current Eastern Conference futures odds for NHL betting to gain perspective on the difficult path that the Tampa Bay Lightning are currently facing.

Even if the Lightning were able to knuckle up and take out Toronto in the first round, they’d have to face the Florida Panthers in the second round – the top odds getter in the Eastern Conference.

The gauntlet would continue as the Lightning would then most likely battle the Carolina Hurricanes in the Eastern Conference Finals. If Tampa advances to the Stanley Cup Finals, their most likely projected opponent would be the Colorado Avalanche.

Colorado has been leading the Stanley Cup futures for most of the 2022 season, and the NHL Playoff picture odds still suggest that they will go all the way this postseason.

Game 1 in the first-round series between the Nashville Predators and the Colorado Avalanche begins tonight at 9:30 PM, and as expected, the top seed in the West is granted a significant betting edge.

If standard hockey game lines are not intriguing enough to inspire online gamblers to reach into their wallets and lay some action, perhaps some of the following NHL prop bets could prove enticing for tonight’s action.

NHL gamblers that can correctly select the first goal scorer from any given hockey playoff game can earn healthy payouts, with all moneylines above +1000. Have a look at the following prop bet as an example.

The above list of NHL players merely represents the top odds getters as there are moneylines available for all active roster members of each team. As readers can see, even the most favorable options, Nathan MacKinnon and Mikko Rantanen, possess positive moneyline odds of +1100.

That means a $1 wager on either NHL player will result in a net payout of $11 if they are the first to score in tonight’s round one NHL Playoff game between Colorado and Nashville.

Similar prop bets are also on the boards for anytime goal scorers (with lower odds and resulting payouts due to the anytime status without the requirement to score first in the game), the first team to score 2, 3, 4, and more goals, and literally hundreds more options when including NHL parlays into the mix.

Of course, none of these wagers can be placed on the above NHL Playoff odds unless readers first become members, so check out each of the NHL betting sites we recommend and consider joining before tonight’s games begin!