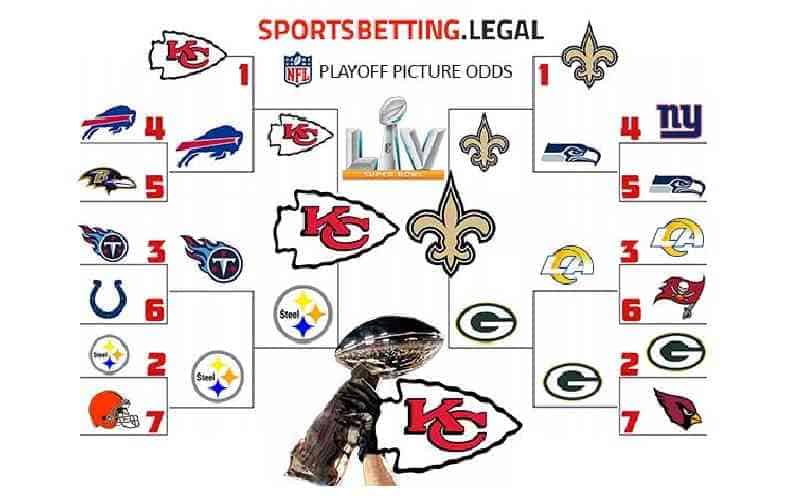 We often investigate Super Bowl futures and the list of NFL teams underneath, asking ourselves which franchise that we think will take home the championship.

Online NFL betting sites produce these lines year-round, but do we ever really consider what these odds actually represent in regard to each team’s path to the Super Bowl?

Our staff has taken this initiative and has produced the following bracket that indicates what the NFL Playoff odds mean when applied to the actual pro football postseason tournament. 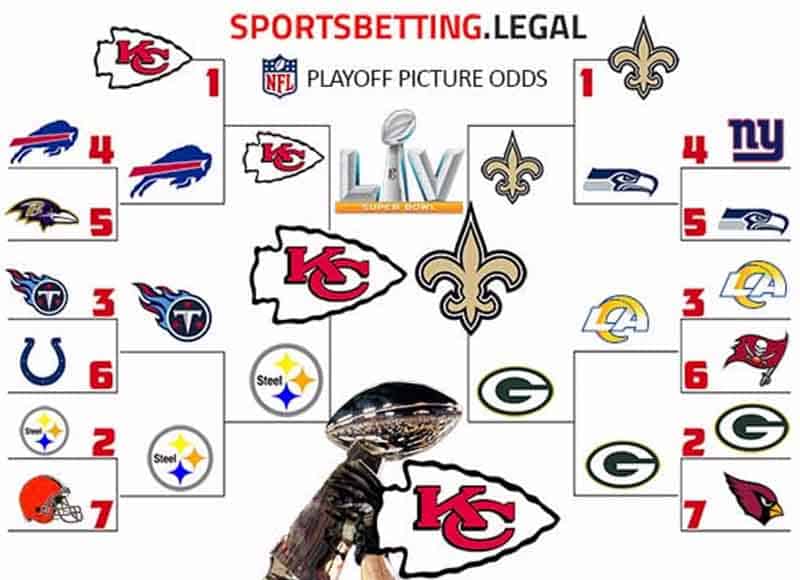 The first item that jumps out at us is that there are teams represented in this bracket that are not currently qualified for the NFL postseason.

Naturally, seeds will change as the season progresses, but the Miami Dolphins and Minnesota Vikings are not projected to make the playoffs according to the betting odds.

In their place will be the 7-5 Baltimore Ravens and the 6-6 Arizona Cardinals. Baltimore’s remaining record is incredibly weak, with only the Cleveland Browns, Jacksonville Jaguars, New York Giants, and Cincinnati Bengals remaining.

However, Arizona has a tough road ahead to finish out the season, rounding out the schedule with the Giants, Philadelphia Eagles, San Francisco 49ers, and Los Angeles Rams.

While those games are winnable for Arizona, none of these opponents are slouches, and all are currently fighting for their playoff lives.

The Minnesota Vikings will have to face the Tampa Bay Buccaneers, Chicago Bears, New Orleans Saints, and Detroit Lions over their final four games in 2020-2021. They’ve got a slightly tougher path to sled than Arizona, but they also have a one-game lead on them, straight up.

The Dolphins currently own the #6 seed in the AFC Playoffs with a record of 8-4, but they are not predicted to make the postseason when combining the NFL futures for SB LV, AFC championship odds, and Division championship betting lines.

On paper, they appear to have the strongest remaining schedule, as they’ll face the Kansas City Chiefs, New England Patriots, Las Vegas Raiders, and Buffalo Bills.

It may sound like a no-brainer to suggest that everything is on the line for Miami over these next four weeks, but they literally control their own destiny and can spoil any projections made by oddsmakers by simply continuing to win.

This weekend’s game against Kansas City is a wash. No one expects Miami to beat the Chiefs. It is the final three games in particular that can dictate their fate, whether it be in or out of the playoffs.

They are nipping at the heels of the AFC East-leading Bills, and if they can keep pace, then their week 17 matchup could determine the division champion and a top-four seed.

Miami’s Week 16 contest against the Raiders could very well determine a wild card position, and there is the potential for one of the teams to clinch a playoff berth with a win.

We here at Sports Betting Legal plan to keep up with this bracket for the remainder of the season, so stay tuned to see how the 2020-21 NFL Playoff picture develops over the final weeks of the season. The outcome of your NFL Playoff bet could depend on it.