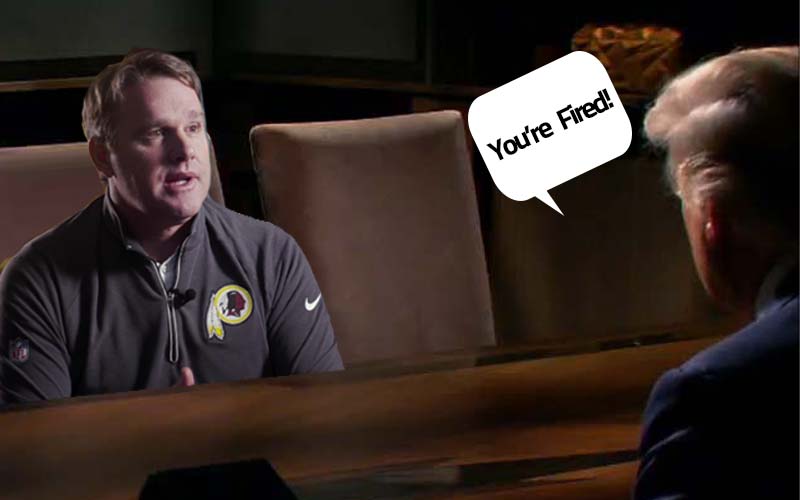 In the coaching world, the pinnacle of success is being named the head coach of an NFL team. However, keeping that post is a completely different beast.

Six coaches were fired at the end of the 2018 season with two others fired midseason. For 2019, like any other year, there’s expected to be more coaching vacancies popping up across the league.

To make unemployment more enjoyable, BetOnline has released prop bets on which NFL coach will be the first of the season to get their pink slips. It’s not looking good for Jay Gruden.

Gruden, head coach of the Washington Redskins, has +450 odds to be fired first in 2019. Gruden was hired by Washington in 2014, going 4-12 in his inaugural season. Despite winning the NFC East in 2015, Gruden’s Redskins have not made the playoffs since.

Misery loves company, which is why we must also mention New York Giants head coach Pat Shurmur and his +700 odds to be fired first at some point during the 2019 NFL betting season. The Giants hired Shurmur in January 2018 to take over for the fired Ben McAdoo.

In his first season, Shurmur led the Giants to a 5-11 season. Now with the loss of WR Odell Beckham Jr. and a QB controversy budding between veteran Eli Manning and rookie Daniel Jones, Shurmur’s job outlook is looking hazy.

First NFL coach to be fired or resign in 2019

There are positives for coaches throughout the season, however. Each year, one coach is crowned the AP Coach of the Year.

The 49ers will get their quarterback, Jimmy Garropolo, back this season after a torn ACL in Week 3 sidelined him for much of 2018. If Shanahan can lead the team to the playoffs for the first time in his tenure, there’s a chance he will win Coach of the Year.

But if the Cleveland Browns do as well as expected, their head coach will likely claim the COY title. Freddie Kitchens has +1100 odds to win Coach of the Year, due to the new combination of QB Baker Mayfield and WR Odell Beckham Jr.