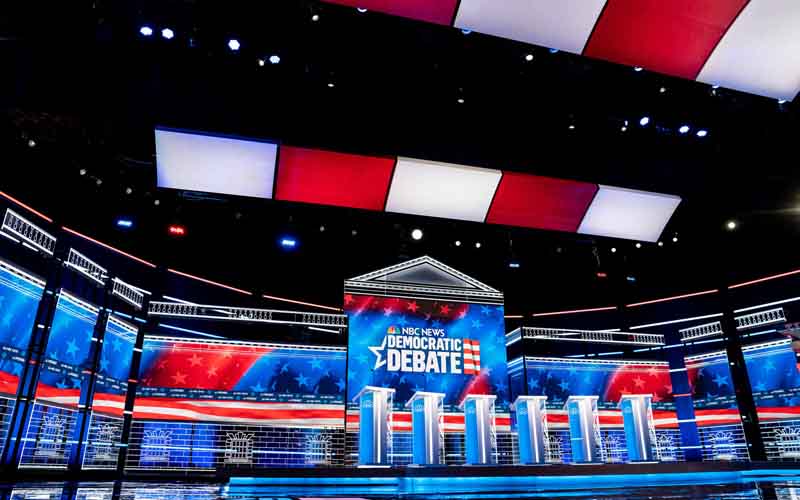 What happens in Vegas, stays in Vegas—but all bets are off for what will go down during tonight’s debate.

The ninth Democratic presidential debate at Paris Theater in Las Vegas takes place tonight and is the final time the candidates will take the stage before this Saturday’s Nevada caucuses.

Bernie Sanders is the betting favorite to win both the Nevada Caucus and Democratic nominee, according to the latest 2020 election odds. Additionally, oddsmakers have released presidential debate props for tonight’s Sin City showdown.

Everything you need to know heading into tonight’s debate is listed below. To learned how to place a bet on politics, check out our Political Betting Guide.

All political betting odds and debate prop bets featured in the article can be found at BetOnline Sportsbook.

Who will win the Nevada Caucus?

Bernie Sanders is currently a heavy favorite to win the Nevada Democratic caucuses this Saturday. At -1500, meaning a $1500 wager would win $100, the Vermont Senator has a 93.75% implied probability of winning the third primary state.

Who’s the favorite for the 2020 Democratic nominee?

Sanders is the odds-on favorite to receive enough delegates to become the Democratic nominee and face President Donald Trump, the Republican incumbent, in the 2020 presidential election on Tuesday, November 3.

Oddsmakers at BetOnline currently have Sanders listed at +100 or “even” odds, where a $100 bet would win $100. This gives him a roughly 50/50 chance of winning the party’s nomination at this point in the race. Bloomberg comes in second at +225 and has an approximately 30% chance of becoming the nominee.

Are there debate prop bets?

Yes, there are proposition wagers available for the Nevada debate tonight. The props include oddities like whether Sanders will say “damn” at any point and how many times “Trump” is said by all candidates.

Since the debate is being held in the gambling capital of the United States, there are also a couple of prop bets relating to legal sports betting. Below is the full list of what’s currently available.

Will “favorite” or “underdog” be said by any candidate?

Will “sports betting” or “gambling” be a topic at the debate?

Will Bernie Sanders say “damn” during the debate?

Will Bernie Sanders say “Epstein” during the debate?

Will “Hillary” be said by any candidate?

How many times will “Trump” be said by all candidates?

How many times will “billionaires” be said by all candidates?

How many times will “China” be said by all candidates?

How many times will “virus” be said by all candidates?

Who qualified for the Nevada debate?

Bloomberg is making his first debate appearance, and it might get ugly for him. The former NYC mayor, who has a net worth of $60 billion, has come under more fire as his poll numbers rise higher, due in large part because he’s spent approximately $417.7 million on ads since his late-entry in November.

Whether it’s getting slammed for “buying the nomination” or his past policies, such as stop-and-frisk, expect Sanders, who’s unquestionably the Democratic frontrunner after the first two primary contests, and the other candidates to be heavily critical of Bloomberg on all fronts.

When is the debate?

The Nevada Democratic debate is scheduled for Wednesday, February 19, and will start at 9 pm ET and last until around 11 pm ET.

Where can I watch/stream?

NBC News, MSNBC, The Nevada Independent, and Noticias Telemundo are hosting the debate. Here are all the platforms that will have a live stream available:

Who are the moderators?

The Nevada debate will feature the following five moderators: