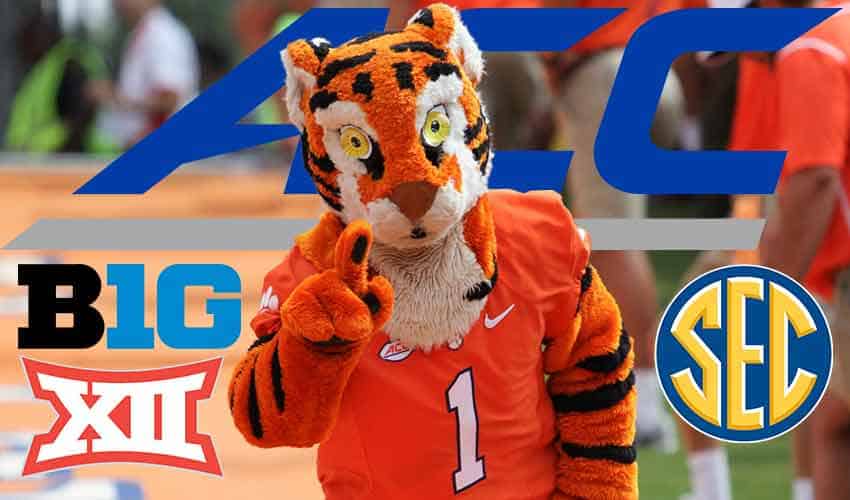 It wasn’t pretty, but the #2 University of Georgia Bulldogs got it done last weekend and defeated the Clemson Tigers who were ranked second at the time by a score of 10 to 3.

Several new lows were set for Clemson’s offense against the Bulldogs, but according to the NCAAF odds posted at popular online college football betting sites, the Tigers are still very much in the running for qualifying for the CFP.

Judging by the above CFP betting line, the Clemson Tigers are expected to earn one of the final four College Football Playoff spots by winning the Atlantic Coast Conference.

When betting on the College Football Playoffs, online sports gamblers must consider the dominance of not only the Power Five Conferences, but the SEC and the ACC. This is illustrated by Oklahoma coming in as the fifth most likely option in the 2021-22 CFP betting odds as the winner of the Big 12.

The Big Ten winner is almost always granted a spot in the CFP, with Ohio State being the dominant force in that Conference since the new NCAAF Playoffs system was installed.

With Georgia’s clutch performance against Clemson, they’re now positioned to make a three-month-long trek through the Southeastern Conference where it appears they can now suffer a loss and still make the College Football Playoffs.

There is even the potential for the Dogs to lose a game, miss the SEC Conference Championship Game in December, and still qualify for the CFP.

Despite the Tigers’ struggles to get the ball moving downfield against the Bulldogs, there is still plenty of reason for optimism in regard to the remainder of the season.

The Miami Hurricanes were expected to be a formidable opponent, and they are showing signs of life, but after a 44-13 shellacking by the Crimson Tide in South Florida, “the U” may be a season or two away.

The next most likely ACC contender in the NCAA Football odds for betting on the CFP National Champion are the North Carolina Tarheels who just suffered a 17-10 defeat at the hands of the Virginia Tech Hokies.

The Florida State Seminoles appear to be back on track for success after a stunning overtime loss to the Notre Dame Fighting Irish, but they’re also likely a season away from relevance before giving Clemson a challenge.

The only real question now is if the Clemson Tigers will suffer a loss during their regular-season Atlantic Coast Conference schedule. If they do, there is a legitimate chance that the ACC could be excluded entirely from this year’s CFP final four.

When glancing at the top end of any other Power Five Conference in NCAA Football, there’s no doubt that the ACC comes in near the bottom of that list.

It would be difficult to deny an undefeated Oklahoma Sooners, Iowa State Cyclones, or Texas Longhorns program out of the Big 12 entrance into the 2021-22 CFP. The same can be said for any of those same Big 12 Conference teams that finish the regular season with one loss.

We’d argue that making a run through the Big 12 with a single loss is a much more difficult endeavor than attempting the same feat in the ACC, and we’ll spend the next dozen weeks or so laying some action on College Football odds based on those projections.