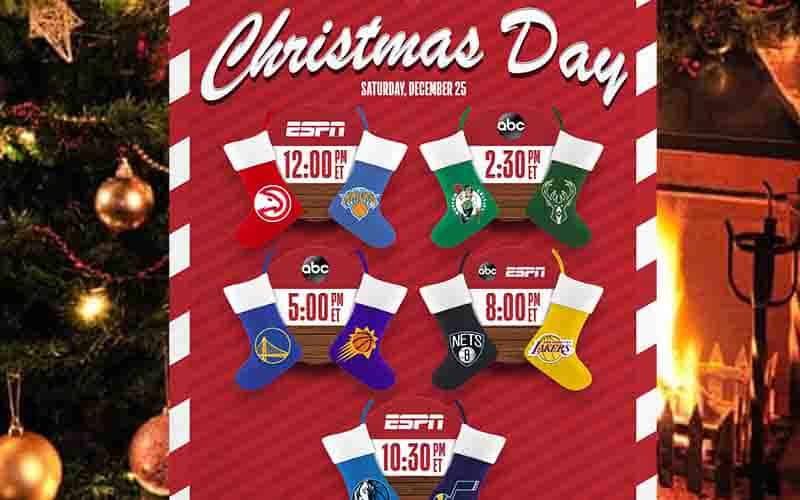 Oh, come all ye faithful, as online sportsbooks have produced lines for Christmas Day NBA betting that are sure to fill pro basketball gamblers with holiday spirit and hefty payouts.

The NBA’s 2021 Christmas Day schedule of games is as follows:

While Christmas Day betting lines for individual NBA games are sparse across the web, Bovada is playing Santa Claus early and has posted several prop bets that ask gamblers to correctly predict a plethora of statistical oddities throughout the entirety of December 25th.

The above two props for NBA betting ask which teams will combine to score the most and least points on Christmas. The Atlanta Hawks and New York Knicks appear to be in line for a defensive struggle while the Brooklyn Nets and the Los Angeles Lakers are expected to light up the scoreboard with their stud-laden rosters.

All options are listed with positive moneylines, so no matter which NBA odds are wagered upon, more cash can be won than the amount being risked.

NBA Odds – Most Assists On Christmas

Phoenix Suns point guard Chris Paul led his team to the NBA Finals last season, coming up just short against the Milwaukee Bucks. The Suns are currently ranked first overall in the NBA’s Western Conference and are in position to make a championship run once again.

Paul is featured with a negative moneyline, which is a rarity in futures odds when so many participants are included.

NBA Betting – Most Points On Christmas

The players listed in the above NBA prop bet for most points scored on Christmas Day has the makings of an All-Star roster featuring some of the absolute best scorers on the planet.

The Warriors’ Stephen Curry is favored to be NBA Christmas Day’s high scorer, but don’t sleep on Luka Doncic of the Dallas Mavericks and his +450 moneyline, as he could play spoiler in the last game of the night.

Rudy Gobert of the Utah Jazz is predicted to secure the most rebounds on Christmas Day and is separated by 330 points in the moneyline from Clint Capela, his nearest competitor.

The Jazz are strongly positioned in the standings and in the futures odds for betting on the NBA Playoffs, and Utah is also incredibly unlikely to be the lowest-scoring team on December 25th if you buy into what the following line has to say.

“The Greek Freak” Giannis Antetokounmpo and his Milwaukee Bucks will be the highest-scoring team this Saturday according to this next Christmas NBA prop, which naturally suggests they’ll win their game.

NBA Odds – Most Points On Christmas

Although these NBA betting lines for Christmas Day can receive action indefinitely, they’ll likely be removed prior to the tipoff of the Noon game so be sure to get your wagers placed early.