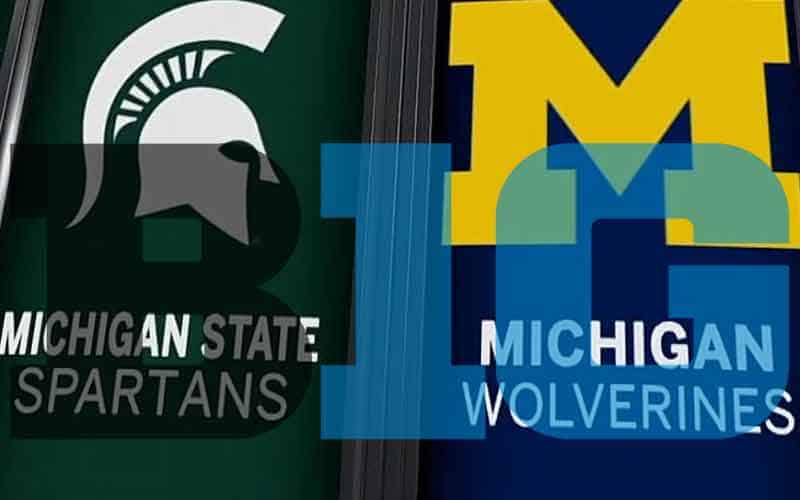 The three apex programs of the Big Ten’s Eastern Division have yet to play each other this season, but that all changes this Saturday at noon when two undefeated in-state rivals clash at Spartan Stadium in East Lansing, Michigan.

Neither the Michigan State Spartans nor Michigan Wolverines need to be reminded about the importance of this game. Both programs have had October 30th circled on the calendar since schedules were debuted. What makes this season’s Wolverines vs. Spartans game unique is the stakes.

The winner will have the opportunity to beat the Ohio State Buckeyes at the end of November and win the Big Ten East, moving on to play in the championship game against what would likely be the Iowa Hawkeyes.

The current odds available online at college football betting sites suggest that the winner of the Big Ten will earn a spot in the final CFP bracket once decisions are rendered by the committee in December.

The Big Ten will be negated from the CFP if they beat up on each other too much. A one-loss Ohio State team (because they already have one loss), or an undefeated Wolverines or Spartans team will definitively earn a spot in the College Football Playoffs.

Really, any Power 5 team that finishes the season undefeated should expect to qualify for a final four seed in the NCAAF postseason. Ohio State and the Alabama Crimson Tide are able to remain in contention with a loss due to their historic success, but programs like Michigan and Michigan St. aren’t granted that leniency.

Even with the Crimson Tide and the Buckeyes’ street cred, another loss and their odds for College Football Playoff betting will fall outside the realm of likelihood.

Alabama is expected to keep on pace until the SEC Championship Game where they’ll face the Georgia Bulldogs. Ohio State’s mettle will be tested as they play Michigan and Michigan State over the final two weeks of the year.

That said, Ohio State’s top placement in the odds for betting on the NCAAF National Championship suggests that they’ll beat both Michigan programs and then move on to win the Big Ten Championship Game against the Hawkeyes.

If the Buckeyes can complete that gauntlet, then they will indeed deserve a spot in the CFP bracket and should strike fear in any opponent facing them regardless of what conference they belong to.

Before all that can be settled, we’ve got a big-time ball game this Saturday that needs to wrap up first. The winner will be in complete control of their own destiny. Michigan has never made it to the CFP while the Spartans qualified in 2016, losing in the first round to Alabama.

The Wolverines are favored to win by 4.5 points, but when it comes to College Football’s historic rivalries, especially those that feature in-state adversaries, throw the records and the betting odds out the window and just hope that your home team comes through with a win.