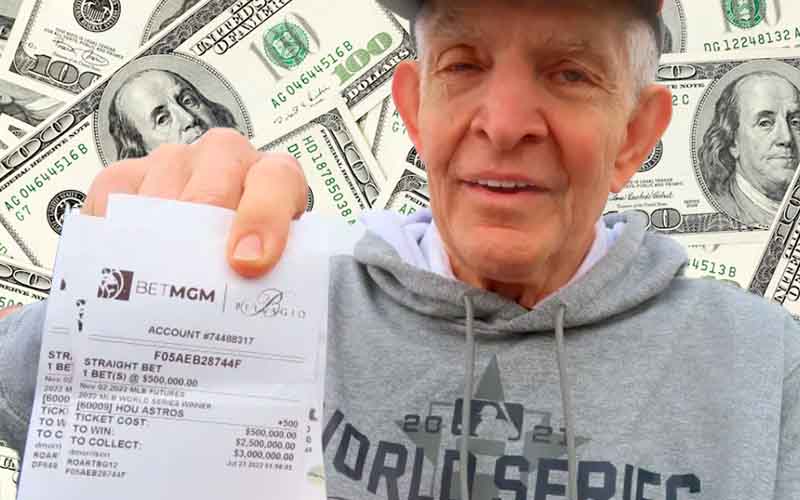 Jim McIngvale, known as Mattress Mack to his customers in the Houston area, won the biggest sports bet of all time when the Astros won the 2022 World Series in six games.

Mack won $75 million by betting on the Houston Astros to win it all this season, which will allow any Gallery Furniture customers who purchased a mattress during the promotion to receive a full refund.

Because there are no domestic options for legal sports betting in Houston, Mack had to place his World Series wagers out of state. Some of the World Series bets were made at BetMGM in Louisiana.

This could cash tonight 👀 pic.twitter.com/O9lex92S6m

The above payout is what dreams are made of and also serves as solid evidence as to why betting early is a good idea. Calling your shot before the season begins always comes with higher odds and resulting payouts.

However, this brave soul took it a step further by precisely predicting the opponent that the Houston Astros would lose the World Series to – the Philadelphia Phillies.

What’s Next For Mattress Mack?

Mack’s promotions for free mattresses typically involve Houston-based teams winning a championship, but he also places wagers on contests that do not involve franchises and programs that reside in Texas.

If gambling on a championship is a requisite, then any NFL betting he does will not include the Houston Texans. They currently hold a record of 1-7-1 with no real shot at making it to the NFL Playoffs.

The NBA season just began, so perhaps Mack could lay some action on the Houston Rockets’ odds of winning an NBA Championship next summer.

Despite only being a few weeks into the 2022-23 NBA Season, the Rockets are already 2-9, with Bovada granting them a +100000 moneyline to win the NBA Finals.

There are also no Houston or Texas-based college football programs that are in the hunt for a CFP National Championship, so perhaps Mack’s next bet will need to be placed on a team outside of the Lone Star State.

Hisense, an electronics company, is also running a promotion where their customers can win a free TV if it is purchased before November 18, 2022.

As long as the television is Hisense branded and is north of 65″ in size, it is eligible for the free TV promotion. So, what does it take to win?

Unlike Mattress Mack’s bets, no championship is required to earn a refund on your Hisense television. All that needs to happen is for Team USA to make it to the 2022 FIFA World Cup Finals.

Before anyone goes rushing off to the nearest electronics store, keep in mind that FIFA World Cup betting sites have granted Team USA a +10000 moneyline.

That designation ranked them 16th overall and roughly translates to a 1% chance of winning. Still, stranger things have happened, so make your way to any electronics retailer that carries Hisense products and purchase a television before the 18th if you want to take part in the contest.