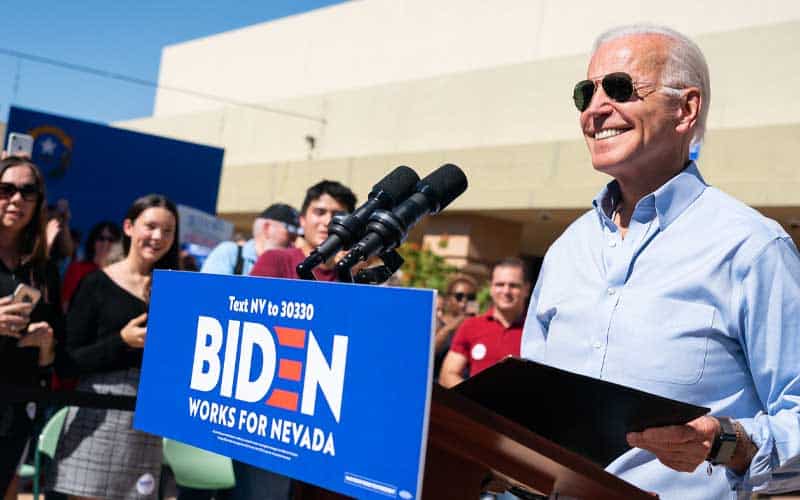 Despite making progress over the past year and a half on sports betting—and gambling as a whole—in the United States, presidential candidates rarely comment on the issue of regulated sportsbooks and casinos.

But one 2020 Democratic candidate recently dipped his toe into the water and made his stance known on legalized sports betting and online gambling.

Joe Biden, the former vice president under Barack Obama, recently commented on several gambling-related issues, including the state-by-state sports betting laws, the federal guidelines bill, and his stance on the Department of Justice’s reinterpretation of the Wire Act.

In a statement provided to CDC Gaming Reports, Biden’s campaign said he did not oppose the state laws or the federal oversight bill but added he “believes states and federal authorities should cooperate to ensure that gambling is safe, fair, and corruption-free.”

But so far, it appears there hasn’t been any debate, at least publicly, between state and federal lawmakers on the topic of sports betting.

The federal sports betting bill—which is a bipartisan effort being worked on by Democrat Senate Minority Leader Chuck Schumer of New York and Republican Sen. Mitt Romney of Utah—aims to lay out a unified regulatory framework for states to follow when enacting their laws.

But many points of contention are reportedly included from the proposed “Sports Wagering Market Integrity Act of 2018” by Sen. Orrin Hatch before he retired last December.

The official league data mandate and 0.25% federal tax are likely to be contested by the states if the bill passes and is signed by President Donald Trump or one of the Democratic candidates after the 2020 general election.

However, the federal bill also sets standards to curb problem gambling and amends the Federal Wire Act to include the transmission of sports betting data across state lines, which essentially nullifies it entirely.

The Justice Department’s Office of Legal Counsel, under the Trump administration, reversed its opinion on the Wire Act in January, stating it believes the law applies to all gambling and not just sports betting.

Under the Obama administration, the DOJ issued an opinion in 2011 stating the 1961 law was intended to stop mob-related illegal sports wagering activities that used wire transmissions and did not apply to online poker or iGaming.

After the 2011 opinion, some states legalized various forms of online gambling, and despite a federal district court in New Hampshire recently ruling against the Justice Department’s reinterpretation, the DOJ said it plans on enforcing its new opinion next year—which could put several state-regulated industries in jeopardy, including online sports betting, poker, gambling, and even lotteries.

However, Biden said he “doesn’t support adding unnecessary restrictions to the gaming industry like the Trump Administration has done” and opposes the DOJ’s new opinion on the Wire Act.

At a Las Vegas campaign event in July, Biden said he would reverse the interpretation back to the 2011 opinion because failing to do so would destroy all the progress and technological advancements made in the sports betting and gambling industry over the past decade.

“I would reverse the White House opinion that was then reversed and overruled by the court,” Biden said, according to The Nevada Independent. “The court is correct. That should be the prevailing position.”

Since the US Supreme Court’s May 2018 decision to repeal the Professional and Amateur Sports Protection Act of 1992, several states have legalized sports betting and begun accepting wagers at regulated sportsbooks.

If Michigan enacts sports betting along with the entire iGaming package—which is expected to happen this week or before Christmas at the latest—then there will be a total of 20 states with legalized sports betting, 14 with online and mobile sportsbooks, five with online poker, and four with Internet-based casinos.

And to top it off: all of the states have varied restrictions, ranging from different age requirements, which types of bets are allowed, bans on games involving in-state colleges, etc.

Under a Biden administration, it’s possible he would look to reach a compromise between the state and federal government and potentially eliminate the Wire Act all together since the PASPA repeal ended the sports betting prohibition.

Outside of Biden, entrepreneur Andrew Yang is the only other presidential candidate to comment on the issue of legalizing any form of gambling. In October, Yang said he supported legalizing online poker since the state-by-state rules do more harm than good.

According to the political betting odds to win the 2020 presidential election, Biden is the Democratic favorite at +600, and Yang is listed at +2500, placing him sixth among Democrats.

However, Trump is the overall favorite at -105 odds, which means the political betting sites are currently giving the Republican incumbent approximately a 51.22% chance to win reelection.