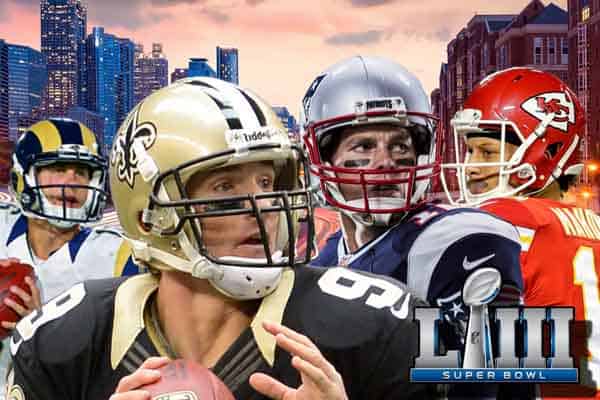 This week is the last chance to bet on Super Bowl 53 futures before the AFC and NFC title games are played on January 20th.

And to help you with your betting models, we decided to find out at the chances of the four remaining teams in the 2019 NFL Playoffs to win the big game, according to oddsmakers.

We’ll do this by examining the odds of the Saints, Chiefs, Patriots, and Rams and do a little math to find out their implied probability a.k.a. the Super Bowl chances of each team winning it all by converting it to a percentage.

The Super Bowl 53 odds we’ll be using are the ones found at Bovada. You can check here to see any changes in the odds before the matchups are played this weekend.

The first step to discovering the Super Bowl chances for each team is to convert the odds to a percentage. We can do this by using the implied probability formula.

After putting all the odds through the formula, you’ll get these percentages which will tell you how likely each team is to win the Super Bowl, according to Bovada.

So that’s it, right? Wrong.

If you add up all the percentages we just converted, you’ll see that it adds up to 108.34%, which isn’t what we want since it’s mathematically impossible to have a chance of something happening over 100% for anything – sports or not.

The 8.34% extra is called vigorish or “juice,” which is the extra percentage baked into the odds and is essentially a fee all sportsbooks have in the odds for letting you bet on any given line.

So, if the odds are slightly skewed, then how can we find the “real” chance a sportsbook is giving a team?

And that’s all there is to it. These odds add up to 100%, which is exactly what we’re looking for when determining the four remaining teams’ Super Bowl chances, and this formula is good for any positive odds (anything with a plus sign in front of the number) you’ll find at a sportsbook.

Whether it’s for the Super Bowl or for odds on any other sport or event, the implied probability formula is a good tool to have and has a 100% chance of assisting you when trying to beat the odds.