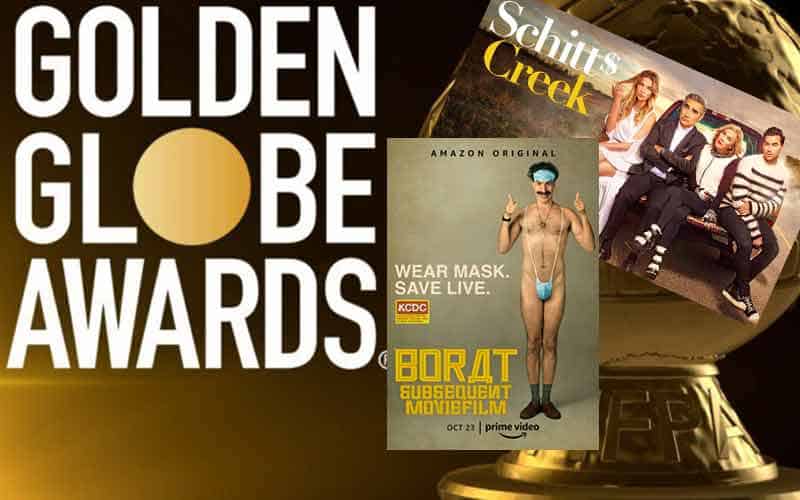 This Sunday at 7 PM on NBC the 78th Golden Globes will commence and usher in a 2021 award show season that has been pushed back due to the ongoing pandemic that still requires that social distancing protocols remain in place.

Amy Poehler & Tina Fey return to host the festivities, supplanting recurring host Ricky Gervais for at least one year, and as usual, attendees will be adorned in high fashion attire as they grace the red carpet and look for a friendly microphone to speak into.

Last week we detailed Borat’s betting odds with our coverage of the 2021 Golden Globes, and since that time, some lines have experienced significant shifts while others have held strong.

The above betting odds for the 78th Golden Globes have seen the top two options in the best comedy or musical film completely separate from the rest of the pack.

While Borat’s chances of winning best film in the category of comedy or musical have improved by 15 points, Hamilton has actually increased its lead by 25 points, surging ahead by 40 over the past seven days.

All three other contenders have suffered triple-digit or more dips in their entertainment betting odds, indicating a low probability of winning while also including a much larger payout than the top options.

All other nominees for best actor in a comedy or musical film have dropped while Cohen, the lead in Borat Subsequent Moviefilm, has improved his chances of winning. A wager of $3 will earn $1 if he captures the Golden Globe Sunday night.

Maria Bakalova still holds a commanding lead in the best actress Golden Globes odds, as the line has remained locked in place for the past week.

The reason that we’ve focused on the odds for Borat to win is that there is always the potential for a sweep during any awards show. Bettors should be mindful and pay close attention to films that have nominees across several categories.

For instance, in two of the three categories, Hamilton has a strong fighting chance against Borat, and if a sweep occurs for either film, it means that there will be some underdog winners that can deliver large cash payouts.

Schitt’s Creek is also predicted to sweep across most of the categories that they are nominated in, but not in all of them. Bettors need to be aware of the potential for Schitt’s Creek to rise and capture each Golden Globe that is available to them to avoid any potential lame-duck bets that get caught in the crossfire.