From Sportsbook To Good Book, Here’s What’s Happening This Weekend 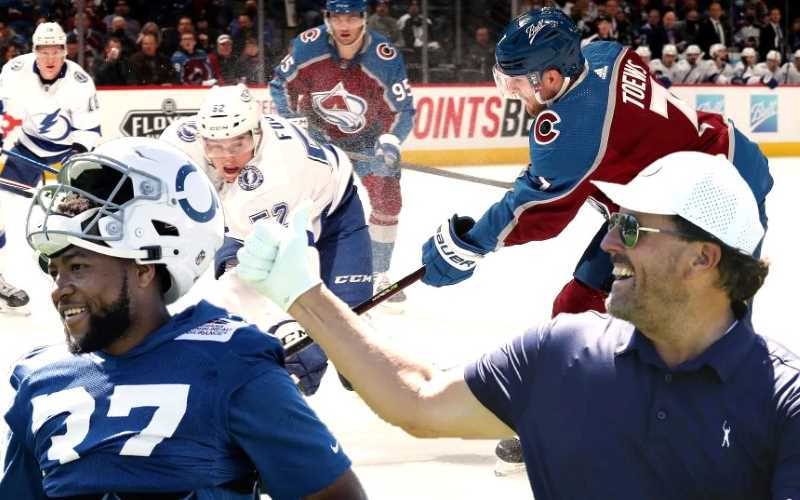 Heading into the weekend, there are a couple of interesting developments in the sports world.

And no, we don’t mean the Warriors’ fourth title in eight years. The Dubs are old news. They’re good. We get it.

We also don’t mean the 2022 US Open or how the wimpy PGA had immediate second thoughts about its blanket ban of LIV Golf participants since all those guys are playing in the PGA major right this very minute, LMAO.

The Tampa Bay Lightning are in their third straight championship series and are the two-time defending champs. A third title in three years would make the Lightning – a winter sports team based in Florida of all places – one of the most dominant NHL dynasties in history.

Of course, the Lightning are up against the Colorado Avalanche, who won five more games in the regular season and took Game 1 of the 2022 NHL Finals in overtime (4-3).

But given that this is hockey – and of all the popular betting sports, given that hockey’s the one where no series lead is truly safe – you might do well to ignore the current consensus that has the Avalanche as mild favorites for Game 2 and heavy favorites to win it all.

If you’re smart, you’ll take advantage of the hype around Colorado and go the other way. It seems almost inevitable that the Lightning will live up to their name and storm back and take Lord Stanley’s Cup in the end.

Here are the current NHL Finals odds for Game 2, along with the series prices:

In the late stages of the NHL Playoffs and particularly during the Stanley Cup Finals, home ice matters.

More than any other sport, high-level hockey seems to favor the home team, which is why so many series go seven games.

As a result, we still don’t agree with the favorite for Game 2. Lightning to steal home ice advantage.

In other notable news – albeit news that’s probably irrelevant for bettors – Indianapolis Colts starter Khari Willis (S) is retiring after just three seasons in the NFL to head up a new ministry.

Willis posted his decision on Instagram, with the statement reading in part:

“With much prayer and deliberation, I have elected to officially retire from the NFL as I endeavor to devote the remainder of my life to the further advancement of the Gospel of Jesus Christ. I thank all of my family, friends and those who have supported me on this journey thus far and I look forward to your continued support through the next phase of my life.”

In retiring, Willis will save the Colts about $2.54 million against the 2022 salary cap.

Interestingly, this – Willis’ base salary for the season – is more money than he’d made in his prior three years of NFL service combined.

As a fourth-round NFL Draft pick in 2019, Willis started 33 games for Indianapolis, tallied 219 tackles, hand four interceptions, and one INT returned for a touchdown. With those numbers, Willis was likely in line for a substantial salary boost coming off his rookie contract.

By most metrics, then, it’s hard to view Willis’ decision to walk away from the game – albeit toward a much more important calling – as a financially motivated one.

That said, depending on the scope of Willis’ future ministry, that may turn out not to be the case.

Now, it’s not totally clear exactly what Willis’ ministry plans are. Will he lead an existing church in his home state of Michigan? Will he open his own church in the Jackson area? Has he partnered with established community leaders? Will he be on TV? Is he doing something with Tim Tebow?

Ultimately, we just don’t know yet.

And while there aren’t going to be any betting lines for Willis’ next chapter, the chapter is worth following for all those football fans and sports fans interested in the ultimate playbook.