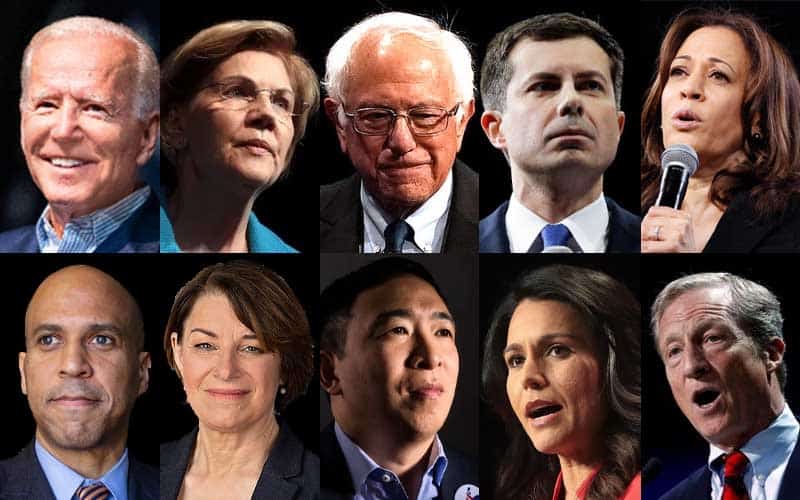 Things may not go so peachy in Georgia for a couple of candidates during the fifth Democratic debate tonight.

Coming from the Oprah Winfrey stage at Tyler Perry Studios in Atlanta, MSNBC and The Washington Post will host the fifth Democratic debate tonight at 9 pm ET.

While last month’s debate in Ohio featured 12 candidates on the stage, the Atlanta debate will only have ten. From left to right, the Democrats present will be:

So what can viewers expect during the debate?

In what could be the hottest topic of the night, it is likely that many questions will focus on the impeachment inquiry into President Donald Trump and the last few days of public testimonies.

So far, some prominent players in the scandal have given their testimonies, including diplomats William Taylor and George Kent, former ambassador Marie Yovanovitch, and ambassador Gordon Sondland, among others.

The chances of impeachment, each candidate’s views on the process, and the overall disdain for the current POTUS are bound to come up during the night. Right now, the over/under on how many times “impeach” will be said is 30 times.

As for the candidates on stage, Buttigieg and Warren are likely to have targets on their backs.

First, the surging Mayor Pete is currently under fire for a variety of reasons despite his great numbers in Iowa.

Not only did Buttigieg’s campaign use a stock photo of a Kenyan woman to represent Black Americans– or his other photo snafu at the Holocaust museum– but the Democratic hopeful falsified the support of “400 Black South Carolinians” for his Douglass Plan for Black America.

Warren, on the other hand, after unveiling her plan for Medicare for All, revealed that there would be a three-year trial period before a true M4A plan would be implemented.

If other candidates are looking for blood tonight, these two Democratic Party favorites are prime targets.

As the hosts of the fifth debate, the event will be available on MSNBC and their website, along with washingtonpost.com, the NBC News app, The Washington Post app, and on SiriusXM Channel 118.

Just ahead of the debate, BetOnline is accepting action on a variety of political betting odds centered on the showdown. For the full rundown, the propositions are listed below.

How many times will the candidates say “impeach”?

Will any candidate endorse another for President?

How many times will Yang say “Freedom Dividend”?

How many times will the candidates say “trillion”?

Will any candidate say “MSNBC”?

Will any candidate say a curse word?